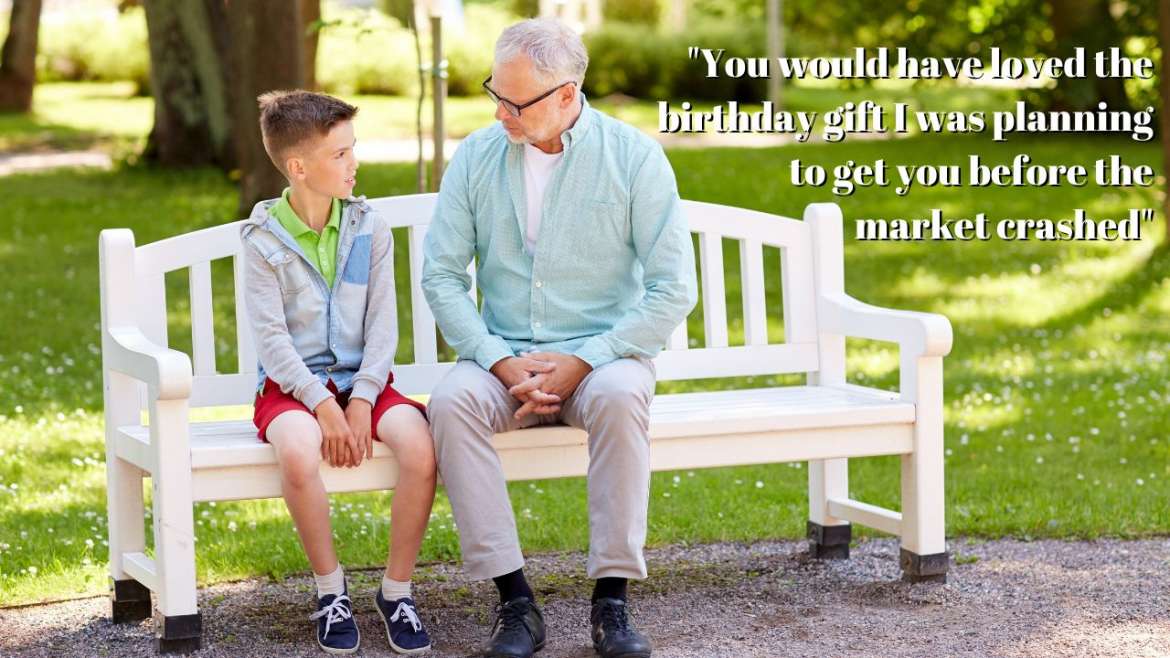 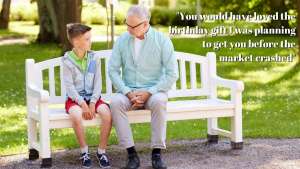 This summer our family is planning to take our first trip out of the country since before the pandemic. All of our kids are now certified to dive and are itching to explore new places.  They are excited to go back to Nevis with us to explore our favorite Caribbean Island and see the monkeys that outnumber humans on the island.

Last September when Jennifer and I were vacationing on the island, I wrote about a possible market top, noting the factors we were experiencing and those that were not present yet.  As we are revisiting the island again with the kids later this month, I thought we’d revisit these factors but relate these to market bottoms.

What seven factors are almost always present prior to market bottoms?

1.  Extreme investor pessimism – Investor confidence bottomed in April.  With Bearish Sentiment exceeding Bullish Sentiment by over 40%, rarely have investors felt this pessimistic.  The chart below shows the returns we’ve experienced in the past after the Bull – Bear spread was this negative (the average return is shaded in black).

2.  Increased Volatility – Volatility levels for the last twelve months peaked in January and have been slowly dropping as inflation fears persist.  Markets often find the first bottom when volatility is the highest and drop to lower lows forming the second leg of the W bottom as volatility drops.

3.  Leading economic indicators look weak including yield curve inversions. – Last quarter the U.S. GDP continued to grow but not after accounting for inflation.  The “real” rate of GDP growth was negative and if this continues, we may technically find ourselves in a recession in real dollar terms after the end of the 2nd quarter.  The yield curve also inverted briefly in March.  These yield curve inversions lead to recessions very consistently but rarely before the market makes new highs.  Market tops after yield curve inversions are attained within 9 months on average. 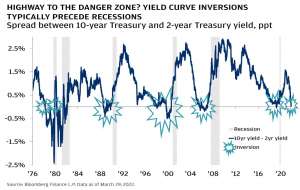 4.  The end of Federal Reserve tightening and interest rate hikes – We are currently encountering interest rate hikes from the “Fed” and additional tightening as they are trying to shrink the balance sheet to temper inflation.  As we have noted multiple times, the market tends to top AFTER the Federal Reserve is done tightening as they become more concerned about recession than inflation.  One exception to this was the dot.com meltup in 1999 and early 2000.  The market topped in March of 2000 prior to the last rate hike in May, but this was only AFTER the Nasdaq had more than doubled in less than a year.

5.  A period of bond, precious metals and/or utilities outperformance – Utilities have been holding up better than the market in general but bonds and precious metals tend to do well when investors become more worried about an upcoming recession than any inflation we might be experiencing.

6.  Market breadth narrows to multiyear lows – When markets are bottoming we see extremely low numbers of new highs and extremely high numbers of yearly low stock quotes. Last month we witnessed the worst market breadth since 2020, but these readings are not as weak as what we witnessed in 2018, 2016, 2015 or 2011.

7.  Heavy insider buying – In May CEO buying exceeded selling for the companies they manage.  As CEOs are in a better position to know more about these companies than most, we like to track this.  Purchases accelerated toward the end of the month with May finishing as a top five reading for CEO buy/sell ratios.  The chart below shows the returns we’ve experienced in the past after the CEO buy/sell ratio was this strong (the average return is shaded in black).

What is the most surefire way to get poor investment results?

Watching technology stocks crater brings back memories of the early 2000s.  The S&P 500 and the Nasdaq 100 outperformed most everything else in the decade prior.  Those who diversifed portfolios overseas, into smaller companies or owned bonds underperformed “the indices” for a while as more and more people chose to just “buy the index”.  Unfortunately, those who “bought the index” suffered greatly during the following decade as the S&P 500 and the Nasdaq 100 experienced negative returns.  Those who stayed diversified and owned smaller companies, non-US companies and most anything outside of these “most popular” indices did not experience the “lost decade”.

We want to remember that the media’s primary agenda is to sell advertising.  They are less interested in helping viewers make good decisions than they are in promoting their ratings and getting the viewer emotionally charged.  To this end, the market’s extremes are exacerbated by the financial news.

Keeping a diversified portfolio may not provide the returns of the most popular index of the age, whether it be the Nasdaq in the 1990s, Emerging Markets in the 2000s or commodities in the 1970s (things are looking much like the 70s now).  Diversified portfolios keep investors from suffering as much as some investors who only owned the “index” in the 2000s.  As can be seen, conservative investors (Asset Preservation) made money in that decade and long-term oriented diversified investors fared even better.

But who suffered the most?

The figure below shows how investors from early 2000 who bought the ten largest most popular companies fared.  They lost money on average over the next ten years and only had a chance of making money after dividends are added over the next twenty-one-year period. 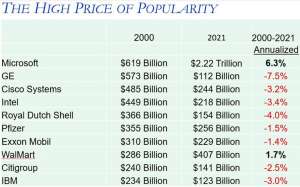 To improve our odds for success we want to diversify overseas and look at temporarily unloved smaller companies that are either managed extremely well, at the cusp of a new technology or trend, have a business where it is hard for others to enter, or compete or a combination of all the above.  We want to find “Tomorrows Blue Chips Today” rather than investing by looking in the rear-view mirror.  It may sound good to tell someone you own one of these popular stocks, but it is not always a good recipe for success unless you found them BEFORE they became expensive, big and popular. 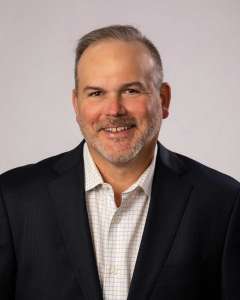 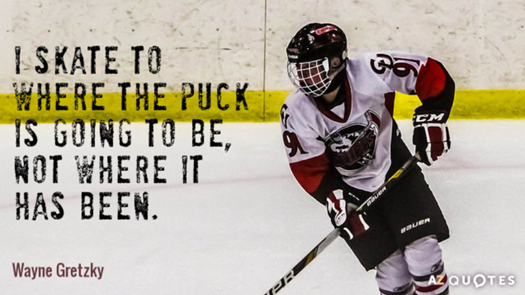 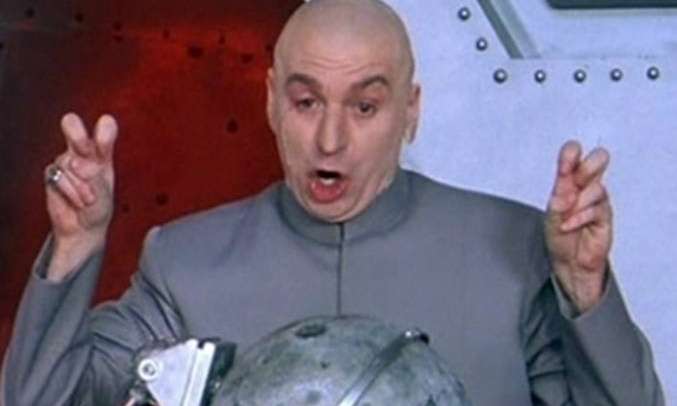