It might be good to revisit what we wrote in April of last year regarding predictions:

"It’s interesting how people tend to extrapolate into the future.  The erroneously assume that what has happened recently will continue at the same pace for the forsee-able future.  It is a behavioral trait that many exhibit that can be hard to temper.  When working with clients, we work to help them keep a long term perspective rather than looking just at the last 2 months or 2 years.

A client we recently brought on board was reflecting on the experience of his first couple of months with us.  His experience so far has been to see his portfolio gain over 12% in these months.  Although we cannot take credit for his becoming a client at such a fortunate time, nevertheless his thoughts on the subject were “Wow, if we continue at this pace for the rest of the year, I’ll double my portfolio in two years!”  We were quick to bring his expectations down and let him know that his timing couldn’t have been much better, pointing out that, for diversified investors, a good result would have been to average 6% over the last 15 years.

Of course, prior to mid-February, many investors suffered through the worst start to the year that we have ever seen for the markets.  Many were thinking that they cannot handle staying invested if the fallout continued.  We were quick to point out that these pullbacks happen almost every year and most years investors who don’t abandon ship are rewarded with positive returns.

No one predicted what we experienced in the first two months of 2016.   By February 11th, 2016 (basically the middle of the first quarter) the S&P 500 was down over 10% for the year, logging the worst start to a calendar year in history.

But then by the end of the quarter, the S&P 500 had not only recovered, but it was POSITIVE and declared one of the biggest quarterly reversals since 1933."

The last twelve months have proven very profitable for those who were lucky enough to get invested in February or March of 2016 or those who remained committed and did not deviate off course.  Those who became invested a year ago and have seen their portfolios appreciate by 20% or more may currently have unrealistic expectations for the future.  Last year was the fourth year in a row that US stock markets outperformed the rest of the world but the first year of these when small companies outpaced the larger ones.

As we have shown a few times over the last few months, smaller companies and specifically smaller value oriented investments have outpaced their larger brethren since the 1920s.  This has not been the case however during the 1990s or over the last few years until 2016.  Diversifying into large and small companies, domestic and foreign, as well as debt and equity have provided more consistent returns over time.  However, those who maintained diversified portfolios have lagged the last four years.  2016 provided diversified investors with better results, especially in the small company and high yield space.  But last year was yet another year when exposure to foreign holdings reduced overall returns.

WHICH COUNTRIES MARKETS ARE BEST POSITIONED FOR THE IMMEDIATE FUTURE?

If we only look at which countries are the cheapest on a pure valuation basis we may want to look at the chart below.  Based upon the research from Research Affiliates, the U.S. markets are more richly valued than any other country.  Based upon the same research, the three developed countries that are the least expensive are Spain, Italy and the U.K. 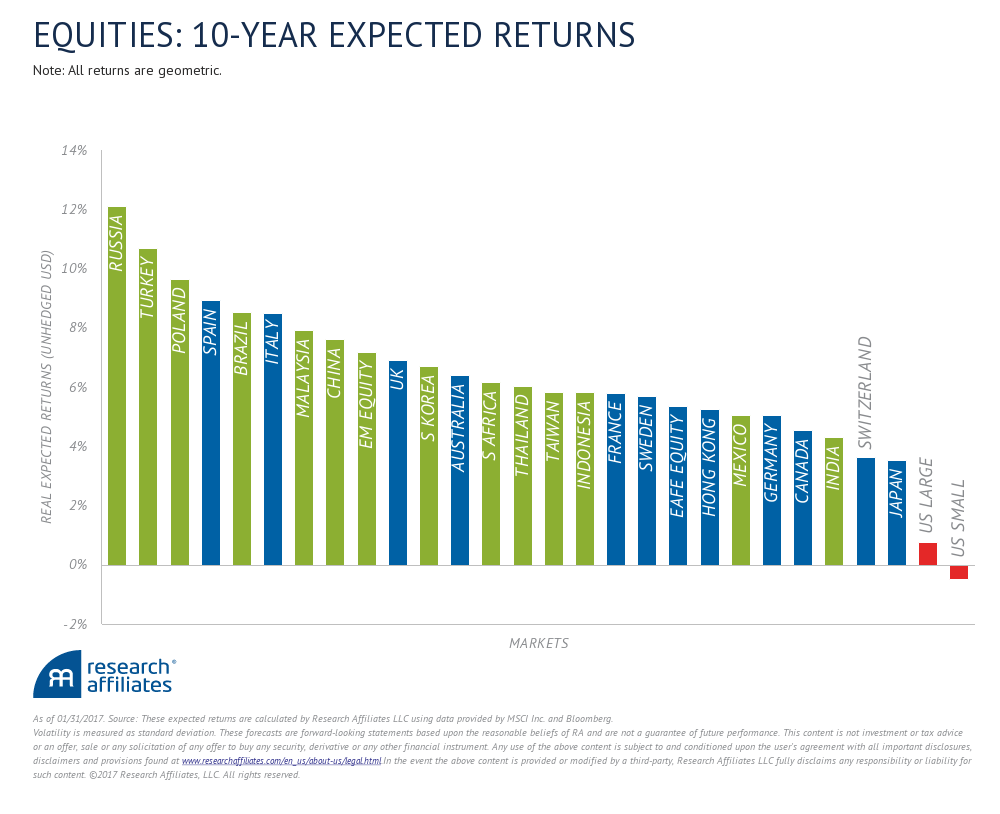 Studies have shown that earnings improvements for corporations and countries are 94% correlated to equity price movements.  If earnings are increasing, the equity prices will also be increasing 94% of the time.  What does this mean for U.S. and foreign markets?  As of Friday the 17th, 66% of companies reporting earnings for the fourth quarter have beaten their estimates.  This “beat rate” is the best we have seen since 2010. 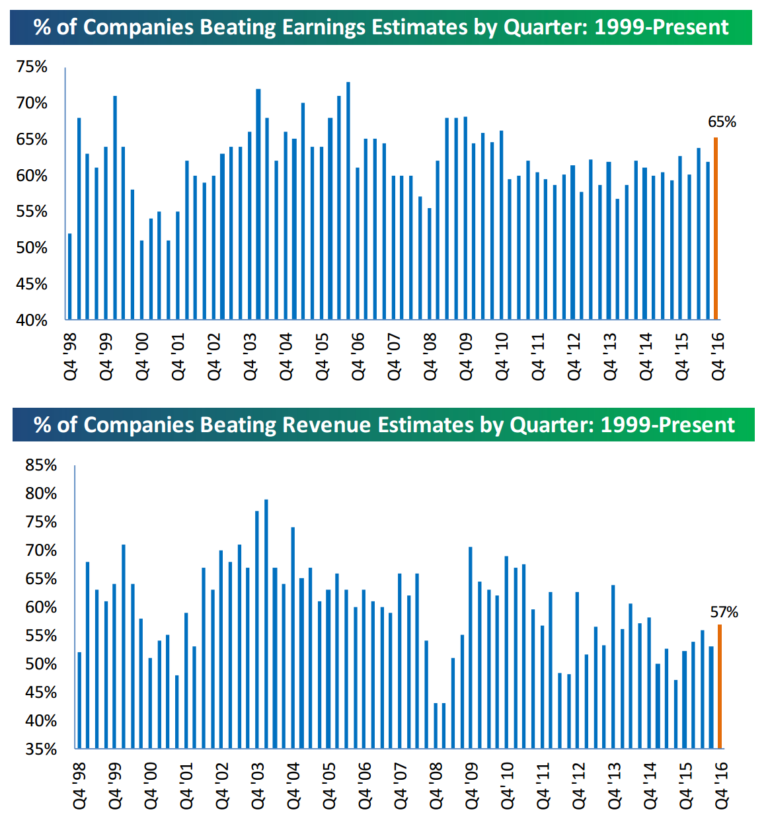 When we look at prospects in global markets, China, India, U.S., Ireland / U.K., Korea and Singapore have all seen positive GDP growth over the last 5 years and are posting stronger GDP numbers currently.  Of these, China and India are at the low end when we look at Market Cap to GDP ratios.  Korea, Singapore and Ireland look a little more expensive and the U.S. looks the most expensive.  As pointed out by Warren Buffett, the percentage of total market cap relative to the U.S. GDP is “probably the best single measure of where valuations stand at any given moment.” The history of the data for other countries is not as long as that of the U.S. but the data nevertheless gives us a good idea of pure value and relative value for those markets. 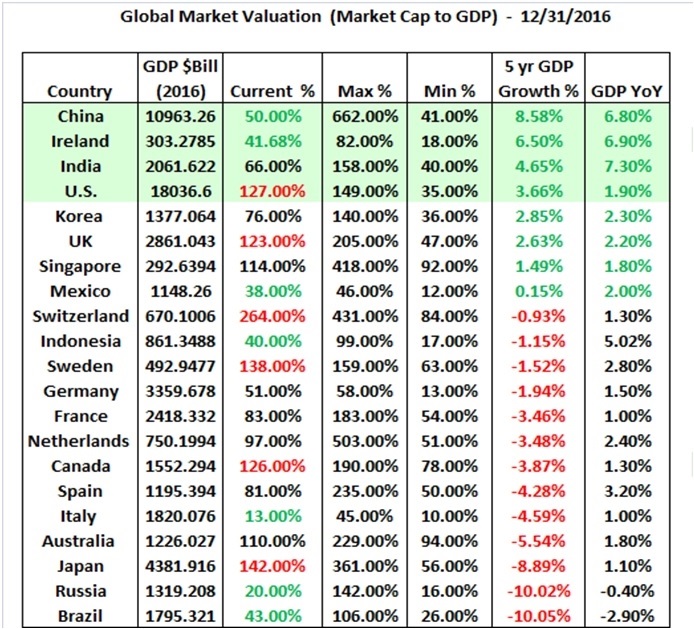 WHAT IMPACT WILL PRESIDENT TRUMP HAVE ON THE MARKETS? 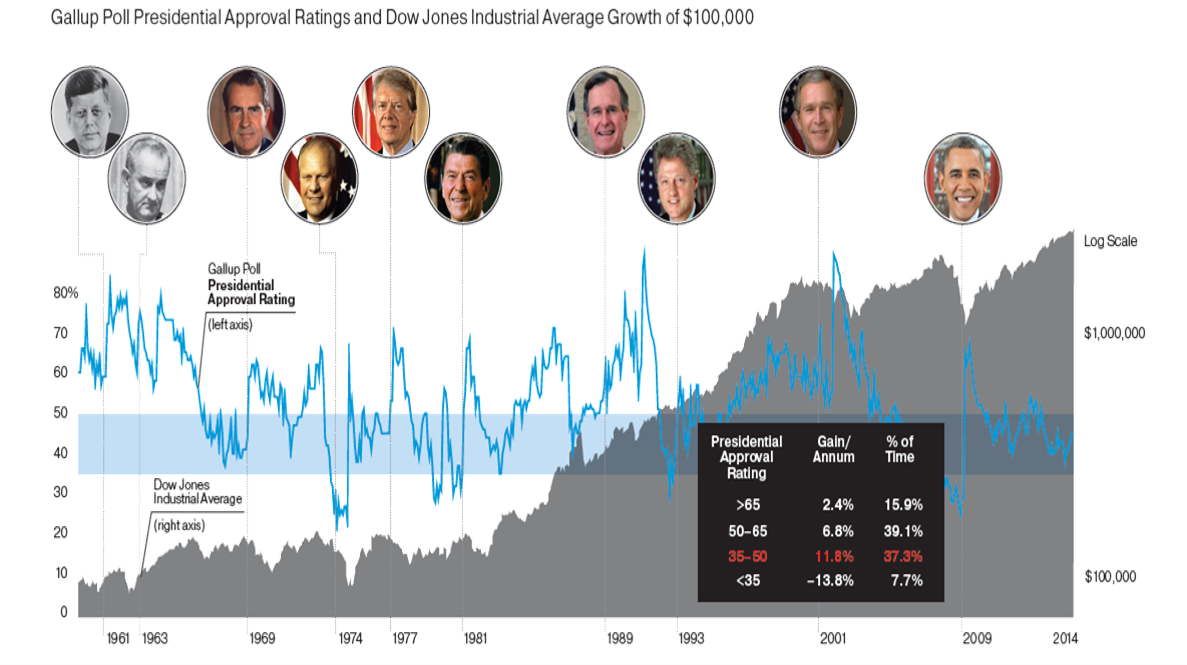 Last year offered many surprises with the start of the year offering up the worst January in U.S. markets history.  Fallout in China and Energy prices led the markets lower than anticipated.  Energy CEOs were buying up shares in their companies at the highest clip we have seen in the last two decades.   Whereas they and we thought these companies offered compelling value, prices continued to drop until February.  Those who held onto these investments were rewarded however and energy companies and especially the pipelines have shown the best results of any sector over the last 12 months.

The recovery was swift and continued until mid-summer.  The British vote to withdraw from the European Union provided a brief buying opportunity when most over-reacted to the unexpected result.  Real estate was particularly popular until August when the sector was added as a stand-alone sector in the S&P 500.  The best time to pare back in this area was in early to mid-August.

We anticipated another buying opportunity, especially as Trump’s polling numbers continued to grow stronger prior to the election.  Those who freed up cash and put the cash to work the day after the election were rewarded, but not as much as we anticipated.  By the time markets opened in the U.S. the next morning, the markets had already started recovering and the resultant rally continued through the end of the year. 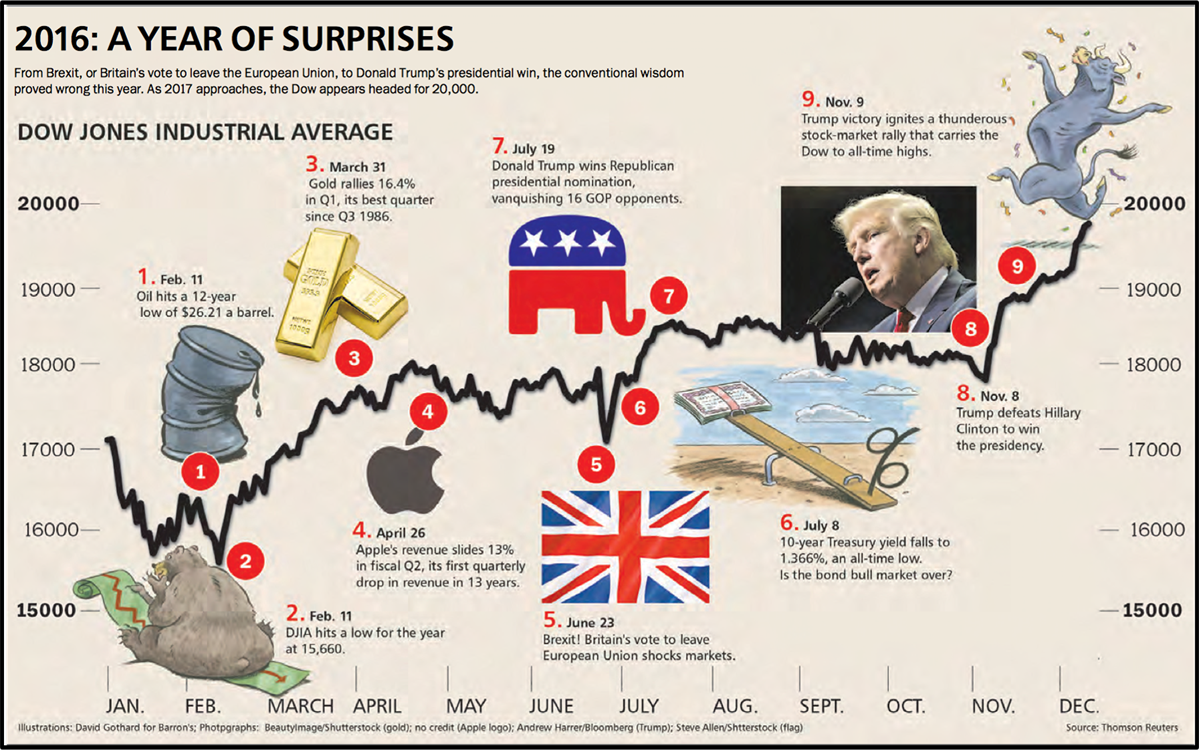 Many are now concerned about markets hitting all-time highs in the U.S.  The average investor is more heavily invested in S&P stocks than we have seen since the 1990s.  Although this causes concern, we see no sign of weakness currently as the economy and corporate earnings are strong.  For those concerned about lofty valuations, diversification into non-U.S. markets and other asset classes may prove profitable and should provide more consistent rewards.

"I always avoid prophesying beforehand because it is much better to prophesy after the event has already taken place. "