Did You Lose Your Head this January? 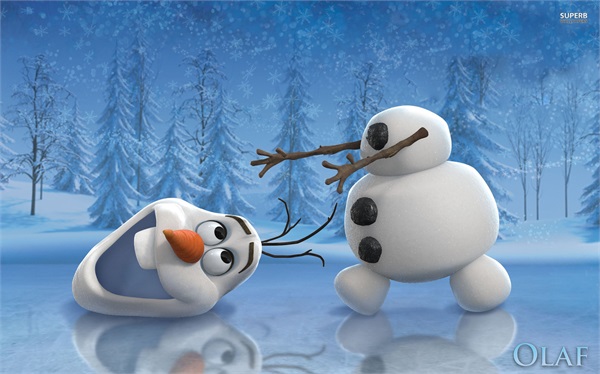 THE COLDEST JANUARY FOR THE MARKETS ON RECORD

Less than two weeks ago we hosted our 2016 Forecast Event sharing a lot of data and best thinking on what investors seem to be most concerned about today compared to what causes concern to institutions, insiders and ourselves.  The last few months since late August has been fraught with much fear and volatility that we had not seen in some time.  Many say there is a calm that comes before the storm and the last few months definitely fit the mold.  We witnessed quite a "selling stampede" to usher in the new year.  The maximum level of fear and volatility so far this year was seen on January 20th and it may prove to be the low of the year.

This selloff definitely did not follow the typical pattern for a selloff, however.  Most market corrections take place during the second and third quarter of the year with the historically worst month falling in September.  January selloffs are relatively rare by comparison and this past month has been the worst January on record for the stock market to follow-up a pretty uninspiring 2015.  Usually we see a nice recovery following a deep volatile market correction and a successful second dip which forms the second leg of the W.  The recovery typically lifts everyone's spirits during the holiday season and many tend to call this a "Santa Claus Rally".

Santa Claus did not come this year.  It seems Jack Frost decided to nip off a little more than our nose instead. Whenever we see the markets start to dip below the December lows, we start to get somewhat concerned.  This happened in the first week of January this year and we took a little off the table.  However, it’s hard to get overly concerned when all the bad news is contained in a "galaxy far far away"  (i.e. China).  Currently from peak to trough, the small company stocks measured by the Russell 2000 have lost 26% of their value, dropping below the lows of August with the higher yielding ones dropping more than average.

The larger companies have fared much better with many still holding up above the August lows.  Energy and transports have been suffering since late 2014 and commodities have been looking weak for much longer.  Those who panicked and moved substantial assets to gold, silver and other precious metals have been experiencing one of the worst routs we have experienced for some time.  It seems there was very little anyone could invest in last year that actually earned a positive return. 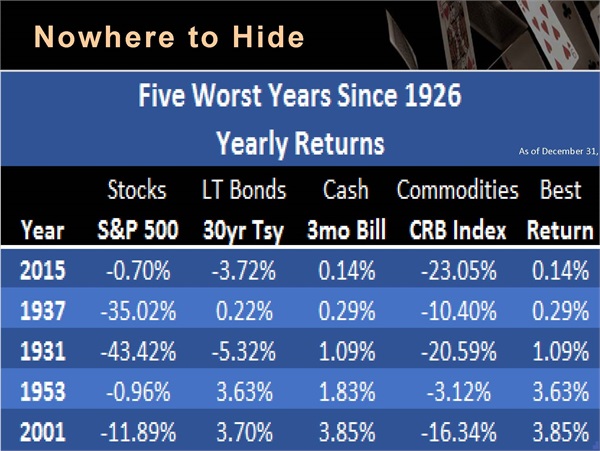 Long term bonds also did poorly in 2015, with 30 year treasuries losing approximately 3.7% in value as interest rates rose.  Typically high yield bonds offer a safe haven in a rising interest rate environment, but they suffered a liquidity crunch late in the year which caused values to drop significantly as well.  European and Japanese bonds, currently providing negative yields offer very little to us currently either.  In fact, when you factor in how strong the dollar has been over the last two or three years, it’s hard not to see that the super strong current of the U.S. dollar strengthening greatly diminished returns outside our borders.  The one bright spot in the bond universe last year was tax free bonds.  Having suffered over the last couple of years, many saw they offered better yields than taxable bonds and many institutions actually changed their investment policies to be able to pick up some good values after getting approval from their boards.

In a low to rising yield environment, bond investing offers very little reward outside of the protection benefits they seem to provide in market selloffs. As can be seen below, they have generally held up well during market corrections.  During all the stock selloffs of 5% or more over the last five years, bonds have protected and actually made money in all periods but one, 2013.  Shifting a greater percentage of portfolios to bonds during the second and third quarter has proven to be a good strategy for protection in all years but this one over the last couple of decades.

Nevertheless, it’s hard to get excited about bonds in general when faced with more years where interest rates rise, unless we are able to find and take advantage of some that are significantly undervalued.  Many in the high yield space may fit that description, currently.

As we noted in our last post, even though the S&P 500 was slightly negative for the calendar year (-0.7%), growth stocks significantly outperformed value and large companies did better than smaller companies.  If we compare the S&P 1000 Value to the S&P 1000 Growth Index, growth outdid value by a staggering 9.27% with the S&P 1000 Value Index losing 8.32% for the year.  The smaller companies did not fare as well as a whole but there was less dispersion between the growth companies and the value companies with the Russell 2000 averaging -5.71% for the year and the growth vs. value disparity at 7.22% in favor of growth.

Over time it is hard to say whether growth performs better than value or vice versa.  Some studies will show that value outperforms growth over time whereas others show that growth outperforms. As noted in the charts below, the last 15 years have been better years to be value investors.

Unfortunately, those companies with the highest dividend yields also suffered more than usual in 2015, even though earnings were generally up with increased dividend distributions. 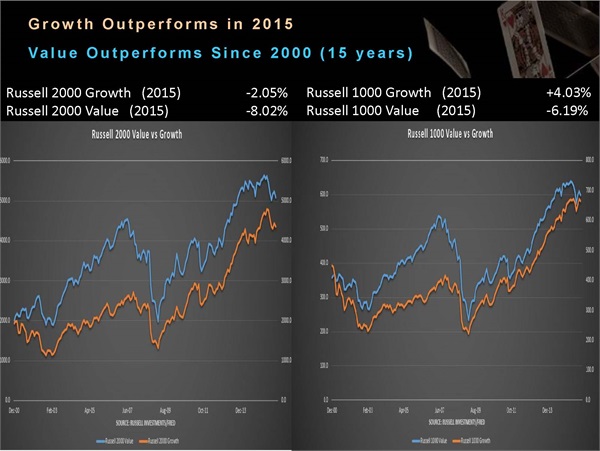 The market woes in China had already surfaced in August and part two of the selloff seemed to be caused by mismanagement of financial instruments utilized to manipulate investor behavior.  It seems the Chinese need to learn that they are going to have a hard time controlling investor emotions and the more they try to manipulate behavior, the worse it may become.  This was most similar to what happened in 2008 when the U.S. tried to stem the tide of short selling.  They failed to admit there was anything out of whack with the rampant borrowing without collateral and continued to put lipstick on the mortgage backed pig, China has been doing the same with their markets.  It is hard to tell what is actually happening in a country that so thoroughly works to inflate their good fortune and win at all costs.  We do not necessarily know that the Chinese emperor has no clothes, but his clothes nevertheless are probably less impressive than he would lead us to believe.

Even considering this, our exports to China only make up about 4% of U.S. G.D.P.   Much of what we are currently seeing is relatively similar to the Asian currency crisis and continued currency crises of 1997 and 1998.  We suffered brief pullbacks each of those years, only to see the market soar higher as investors "bought the dips". 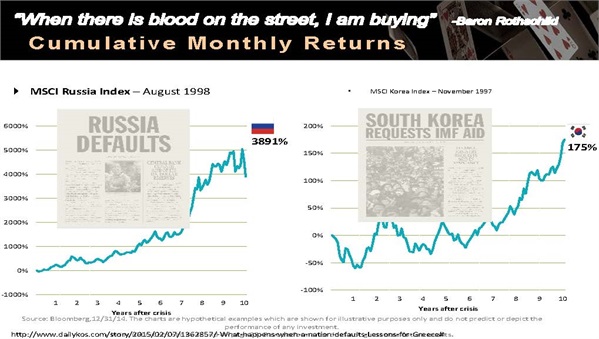 Energy prices also put in a long term bottom in 1998 and rose consistently throughout the next decade.  Whereas we have probably never seen this steep a drop before, lower energy prices tend to translate to higher profits for most companies as expenses related to energy top all other expenses with the exception of payroll.  Lower energy costs usually translate to higher profits as fixed pricing falls by the wayside and companies start to actually realize lower expenses. 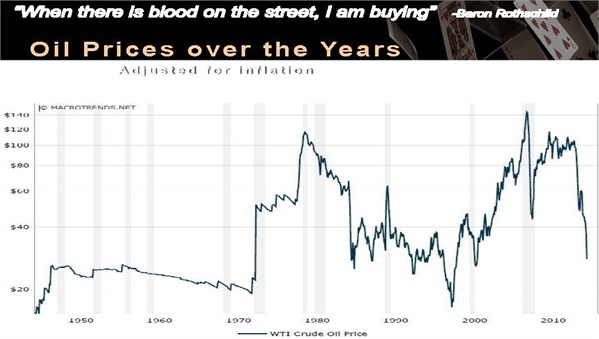 In the U.S. the damage done to the average investor's psyche is pretty gruesome but the U.S. economy and corporate earnings are still pretty strong.  LPL financial releases proprietary research on the "Over Index" each quarter.  This "Over Index" measures the combined factors which translate to "Over Confidence", "Over Borrowing" and "Over Spending".  Currently we see none of those in our country whereas China may have suffered from an "Over-dose" which may hang over them for some time. 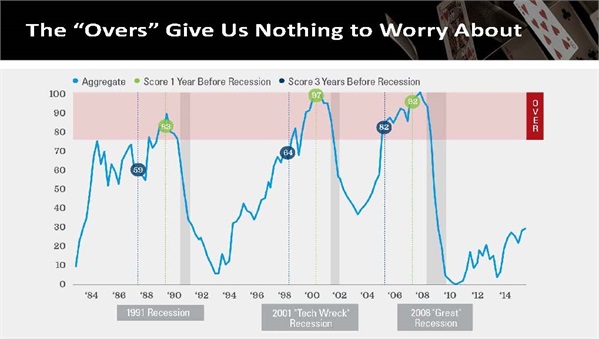 WHAT HAPPENED TO "BUY THE DIPS"?

It's good to remember that we have seen these types of selloffs before and lived to see the markets and our portfolios hit new highs afterward.  Its those investors who get too wrapped up in the hype and constant barrage of "Bad News" from the media that are hurt the worst.  They tend to panic and suffer when others who take a longer view are not fazed.  These selloffs happen almost every year.  It's only when we focus too strongly on the short term, measuring from the top of the wave to the bottom that we cause ourselves grief.  It's fine to be down as long as you are not out.  Only those who stick with the plan and stay invested find themselves on top again. 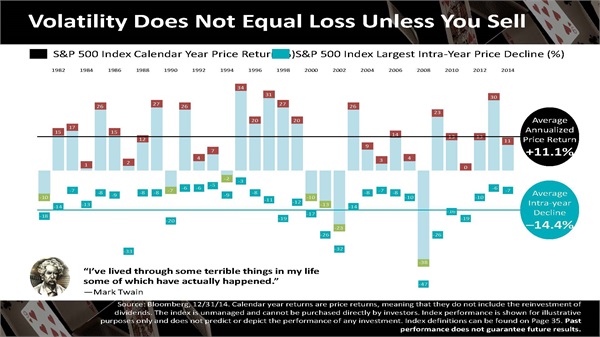 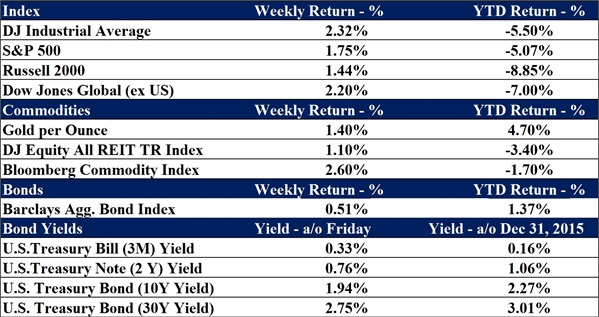 Please remember that past performance may not be indicative of future results.  Indexes are unmanaged and cannot be invested into directly.  Index returns do not reflect fees, expenses, or sales charges. Index performance is not indicative of the performance of any investments.  Different types of investments involve varying degrees of risk, and there can be no assurance that the future performance of any specific investment, investment strategy, or product (including the investments and/or investment strategies recommended or undertaken by Franklin Wealth Management), or any non-investment related content, made reference to directly or indirectly in this blog will be profitable, equal any corresponding indicated historical performance level(s), be suitable for your portfolio or individual situation, or prove successful.  Due to various factors, including changing market conditions and/or applicable laws, the content may no longer be reflective of current opinions or positions.  Moreover, you should not assume that any discussion or information contained in this blog serves as the receipt of, or as a substitute for, personalized investment advice from Franklin Wealth Management.  To the extent that a reader has any questions regarding the applicability of any specific issue discussed above to his/her individual situation, he/she is encouraged to consult with the professional advisor of his/her choosing. Franklin Wealth Management is neither a law firm nor a certified public accounting firm and no portion of the blog content should be construed as legal or accounting advice. A copy of Franklin Wealth Management’s current written disclosure statement discussing our advisory services and fees is available for review upon request.
Share |