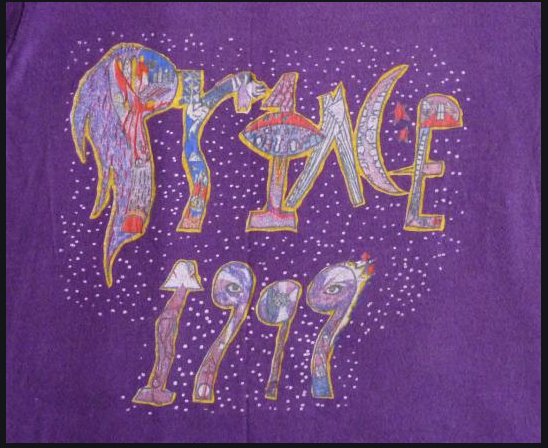 When Prince originally wrote the song 1999, thoughts of the "dot.com bubble" and two bear market selloffs in the following decade were probably furthest from his mind.  Many have forgotten or never experienced the “lost decade.”  Unfortunately, those who have forgotten are most likely to repeat the mistakes of the past.  Taking a look at the common mistakes of this decade and what could have been done to protect from these missteps, we see many similarities to today.

Many financial planners were not practicing in the late 1990s and are not likely to recognize the similarities between then and now.  Index funds became more and more popular as it looked foolish to diversify when the S&P 500 fared much better than anything else save technology stocks and the latest dot.com IPO.  So what lessons bear repeating from twenty years ago?

Last year we decided to take a look at the largest most popular companies of 1999 and see how some of these companies have fared over the past two decades.  Just looking at the ten largest market-cap companies from 1999 and how they have fared through the beginning of this year, we can see that only two have grown in value.  The company formerly headed by Bill Gates has done best and has grown by just under 2% per year while the company formerly run by Jack Welch has done worst and has lost over 8% in market value per year since 1999.  We find that twenty years later, many investors feel they are “safe” buying and holding the largest most popular companies and may suffer from the same mistakes many made twenty years ago.  Many of the best performers of the last twenty years were much smaller, lesser known companies at the time.  Others were left for dead only to rise from the ashes and give investors significant upside.  Warren Buffett is fond of saying “You pay a very high price in the market for a cheery consensus” and has proven that buying companies when they are relatively unknown or unpopular is more profitable over time. 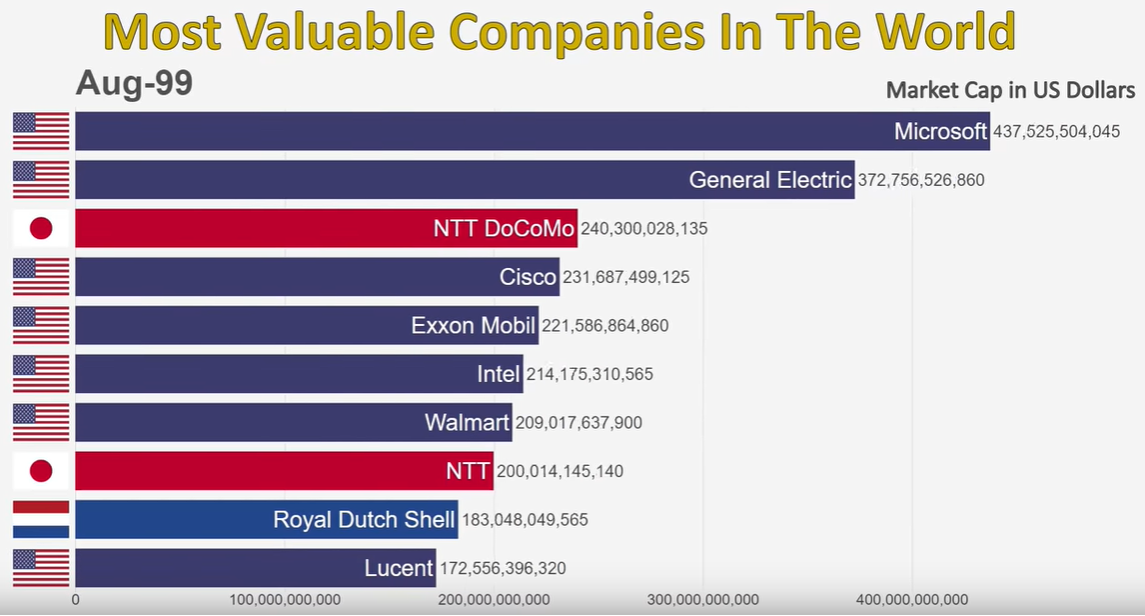 Click the picture above to see how the world's most valuable companies have changed over time.

The most extreme example of “failure to diversify” would be to own just one company stock. In the opinion of most informed investors, this is not a wise or viable strategy. Instead, we will define a “Non-Diversified” portfolio as one that represents just one asset class, U.S. large-cap stocks represented by the S&P 500.

This “Non-Diversified” portfolio over the “worst 30 year plus” period of the last century still gave us a return slightly over 8%, but all investors in stocks know that this ride was not without bumps along the road. Since the early 1970s the S&P 500 has finished the year down roughly a quarter of the time, 2008 being the worst, down -38.2%. 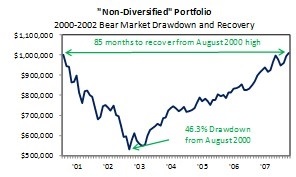 A highlight of the worst year, 2008, does not measure the full magnitude of losses incurred by this portfolio. The accompanying graph illustrates one of the worst total losses sustained by this “Non-Diversified” portfolio, a 46.3% loss during the 2000-2002 bear market. This is an illustration of a “Drawdown”. The accompanying graph further illustrates the 85 months to return to the previous high, an example of measuring “Peak-to-Peak” recovery times.

Conversely, a “Simply Diversified” portfolio adding small company stocks, international stocks and bonds reduces volatility by close to a third and reduces the maximum drawdown over this same period by over 24%.  Furthermore, the time it takes to recover losses is reduced to 52 months.

As can be seen from the chart below, bonds suffered least and small companies fared best over this time period immediately following the 1990s bull market.

By diversifying further into emerging markets, real estate and other alternatives, maximum drawdowns are further reduced over the last 40 plus years.  Investors forgot these diversification benefits in the late 1990s and we want to avoid repeating these same mistakes.

Lesson #3 –  IPOs and other Popularity Contests

A recent study published in 2018 shows how due to overpricing and speculation associated with initial public offerings, the average returns in first two years lag all other companies by 4.4% in the first year and 8.0% in the second year.  If an investor can acquire shares before the offering and sell at the end of the first day, they can do better than average, but investment bankers are highly unlikely to continue to provide new issues to investors known to sell immediately.

Regular rebalancing of the asset classes is an important component of the long-term success in any portfolio. This process is often ignored by investors. For those that do attempt to rebalance, they often find it difficult because it is the process of selling some of the best performing assets and buying the poorer performing, a process that goes against the emotions of most investors.  We’ve found systematic rebalancing of the asset classes is best to be done as often as semi-annually, eliminating all emotions from the process.

Rebalancing at key inflection points can make an even bigger impact.  Reducing risk exposure after a period of stock outperformance and buying more stock after a selloff can be difficult for many.  We are just wrapping up our fall rebalancing period when we typically add to our equity exposure.  This year we are adding less than usual due to a stronger market during the summer months.  A chart showing the benefits of rebalancing can be found below. 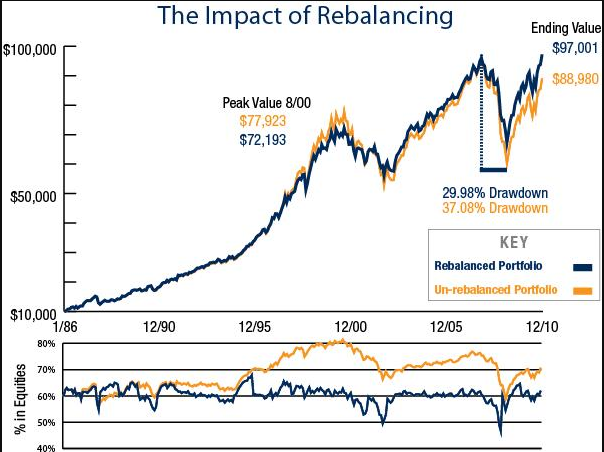 Those clients we engage in tax and retirement planning are often surprised how much they can benefit by taking steps to maximize their social security benefits, save more tax efficiently, defer and even completely eliminate future taxes and manage / retire current debts more efficiently.  We compare this to earning an extra percent or two at the same risk levels and the planning strategies almost always show more benefit to clients.  From an investment perspective, we’ve found that what we do to help clients avoid hurting themselves is where we add the most value as well.  Of course, we are also heavily involved in the estate planning and implementation of plans after the blueprints are created, but some of these items are easier to quantify than others.  Below is how Vanguard quantifies the value of a good advisor, which we feel is worthy of consideration.

Please remember that past performance may not be indicative of future results.  Indexes are un-managed and cannot be invested into directly.  Index returns do not reflect fees, expenses, or sales charges. Index performance is not indicative of the performance of any investments.  Different types of investments involve varying degrees of risk, and there can be no assurance that the future performance of any specific investment, investment strategy, or product (including the investments and/or investment strategies recommended or undertaken by Franklin Wealth Management), or any non-investment related content, made reference to directly or indirectly in this blog will be profitable, equal any corresponding indicated historical performance level(s), be suitable for your portfolio or individual situation, or prove successful.  Due to various factors, including changing market conditions and/or applicable laws, the content may no longer be reflective of current opinions or positions.  Moreover, you should not assume that any discussion or information contained in this blog serves as the receipt of, or as a substitute for, personalized investment advice from Franklin Wealth Management.  To the extent that a reader has any questions regarding the applicability of any specific issue discussed above to his/her individual situation, he/she is encouraged to consult with the professional advisor of his/her choosing. Franklin Wealth Management is neither a law firm nor a certified public accounting firm and no portion of the blog content should be construed as legal or accounting advice. A copy of Franklin Wealth Management’s current written disclosure statement discussing our advisory services and fees is available for review upon request.