What Happens If the Fed Doesn't Cut Rates?

If you were not able to make our half time report, Ann McAdams covered what Pimco sees happening from a Macro perspective and detailed what they see the Federal Reserve doing over the next few months, prior to the 2020 election.

The Federal Reserve this week will most likely cut interest rates for the first time in over a decade as the central bank tries to keep an aging economic expansion from petering out.

The expected change, while likely to be small, will end an era of gradual rate increases intended to return the economy to a more “normal” state in the wake of the Great Recession, when the Fed slashed rates to near zero as it tried to rescue the economy. The Fed’s approach has largely worked — the United States economy is growing, unemployment is at a 50-year low and wages are slowly rising.

The Fed kept interest rates low and injected our economy with more and more economic juice, flooding the system with cash, until roughly 2015.  After 2015 the Quantitative Easing or dumping of cash into the economy was halted and later in 2016 the Federal Reserve started to raise rates.  Since this time the markets have become more volatile and unpredictable as the Federal Reserve has not provided the support evident during the Quantitative Easing years.

2018 was marked by swings that were almost entirely driven by the Federal Reserves actions and concerns about the impact of increased tarriffs.  Our country's Gross Domestic Product kept growing and earnings kept improving, but the markets were looking for reasons to embrace fear and the Federal Reserve did not disappoint in this respect.  Many felt they went too far in tightening our monetary policy, raising rates and pulling dollars out of circulation.

This year it seems the Federal Reserve has done an about face.  Mr. Powell's stance seemed to change after the markets reacted violently at the end of the 2018 when he continued to raise interest rates.  “The Fed acted too soon. I turned out to be right, they acted too soon and too violently,” Mr. Trump said on Friday at the White House.

But what is likely to happen now?

1)  The Federal Reserve does not lower rates.  This will most likely lead to an immediate selloff in that the markets are already anticipating at least a quarter percent rate cut.  It will possibly send a message to the markets that our Fed chairman is too unpredictable and may lead many to embrace a more cautious posture.  It may cause others to believe that we have hit the brakes too quickly and we may need to be prepared for a "hard landing".

2)  The Federal Reserve lowers rates by a quarter percentage point.  This most likely scenario may still lead to a market selloff in that markets tend to anticipate and "Buy the Rumor and later Sell the News".

3)  The Federal Reserve lowers rates by a half percentage point.  Most are not anticipating a move of this magnitude and could lead to a short term rally but also send a signal that the economy is in a more shaky situation than anticipated.

Most are concerned about a possible recession and a Federal Reserve which acts too aggressively in fighting inflation and a potential overheated economy.  When the Federal Reserve has raised short term rates in the past we often witness an inverted yield curve where the short term interest rates are higher than the longer ten year rate (primarily when looking at Treasury Bonds).  We rarely see an inverted yield curve that has not preceded a market selloff and a recession.  In fact there are only two periods over the last 50 plus years when the 10 year treasury bond was paying less than the 2 year treasury bond that has not led to a recession.

We have been very close to these ominous precursors over the last few months, only narrowly missing these telltale signs. 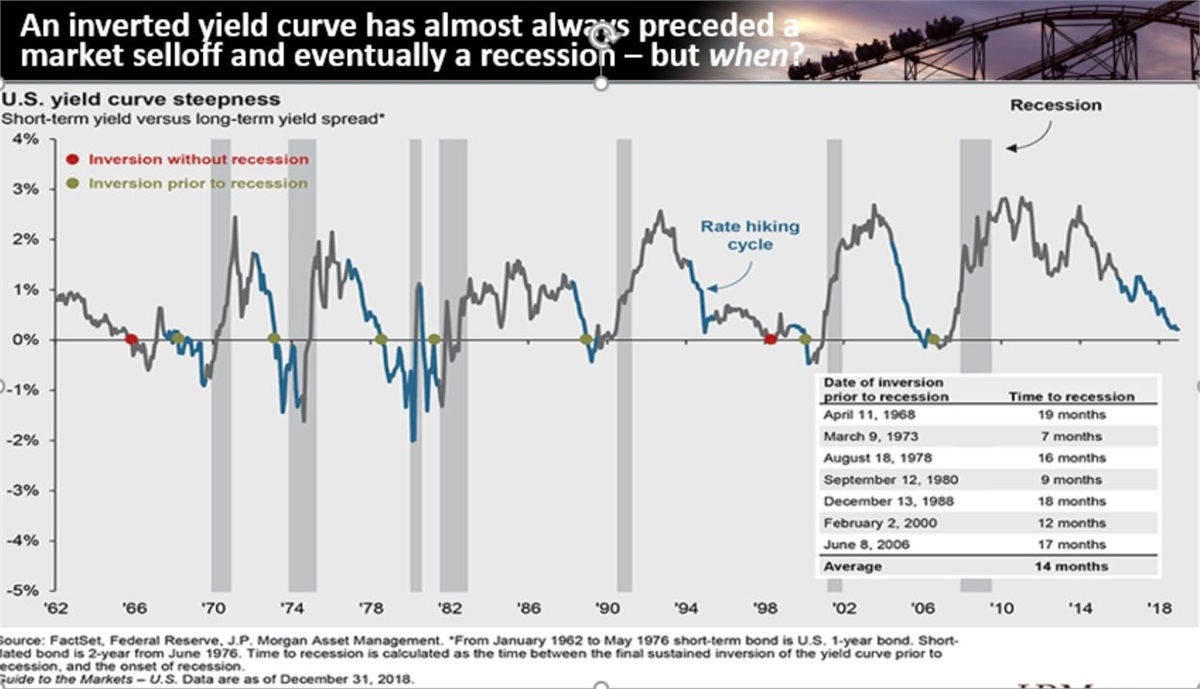 It's interesting to note that even when we see these inverted curves, typically the markets continue to advance for several months and the recession is not seen for over a year afterward.  Its an ominous sign but it gives plenty of advance warning for those who are alert.

We've had a good run over the last decade with U.S. stocks outpacing all other markets.  In looking at the chart below we can see that small U.S. companies (in blue) have outperformed over much of this period, although not the last 12 months.  In fact, they have under-performed relative to past measures for most of the last decade. 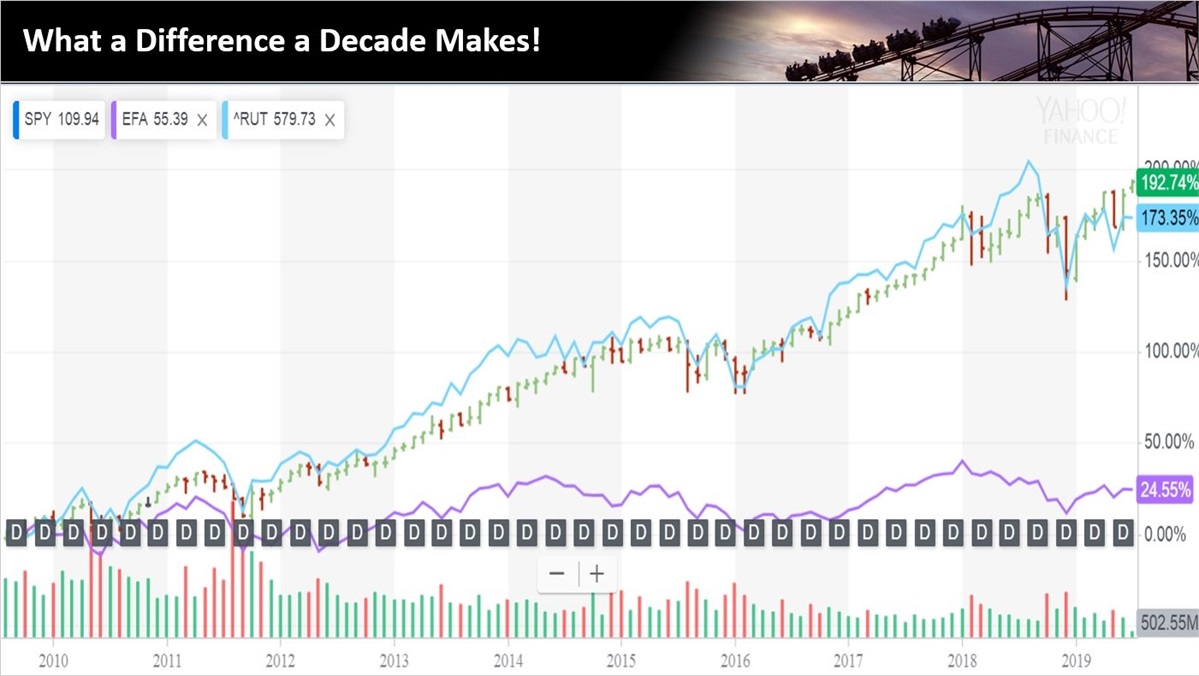 If we look at the decade of the 2000s, we will see a period where stocks did not do particularly well in general but U.S. small companies (in blue) held up relatively well and outpaced more well known larger U.S. companies by over 50 percentage points.  This lost decade still provided decent returns for those who invested in smaller companies and non-U.S. companies (in purple) as well as larger more well known companies.  Those who stayed away from the most overvalued popular companies of the 1990s fared the best in the 2000s. 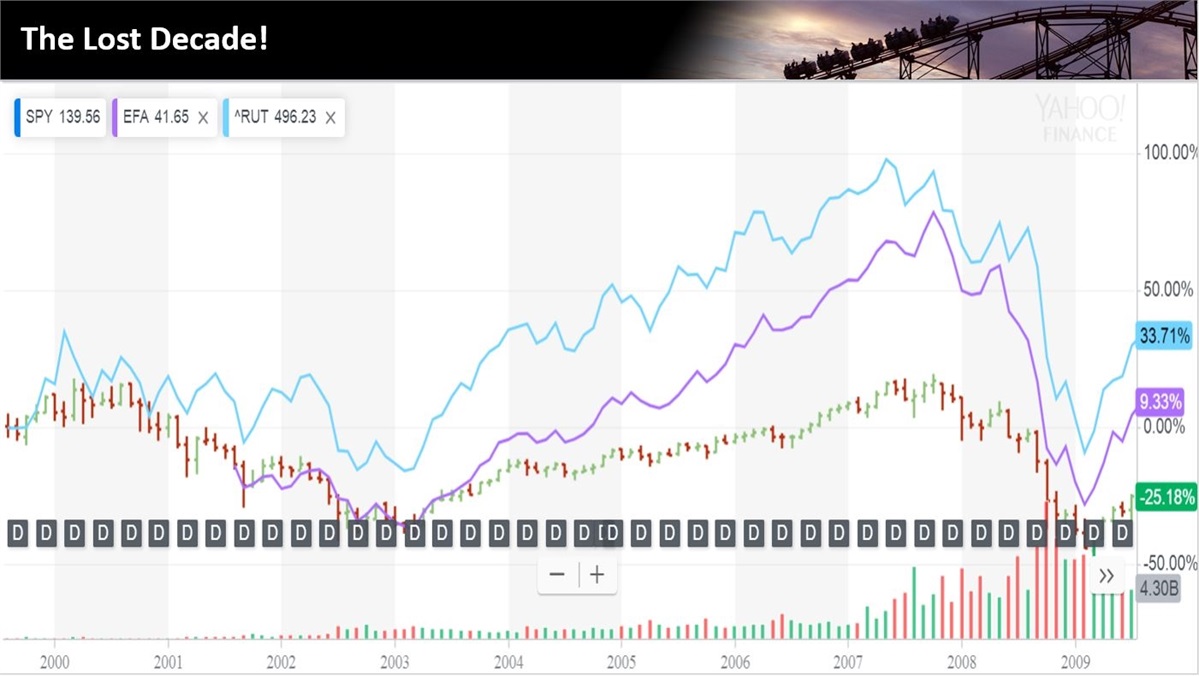 Are investors too optimistic?

This does not seem to be the case currently. At the beginning of 2018 you could make that case, but not now.  Investors are closer to being fully invested however.

Cash on the sidelines is now only 3% away from the 2000 lows seen during the dot.com bubble.  Equities are still over 13% away from these same highs, however.  We like to follow these developments and it is entirely likely that we could approach another extreme within the next twelve months. 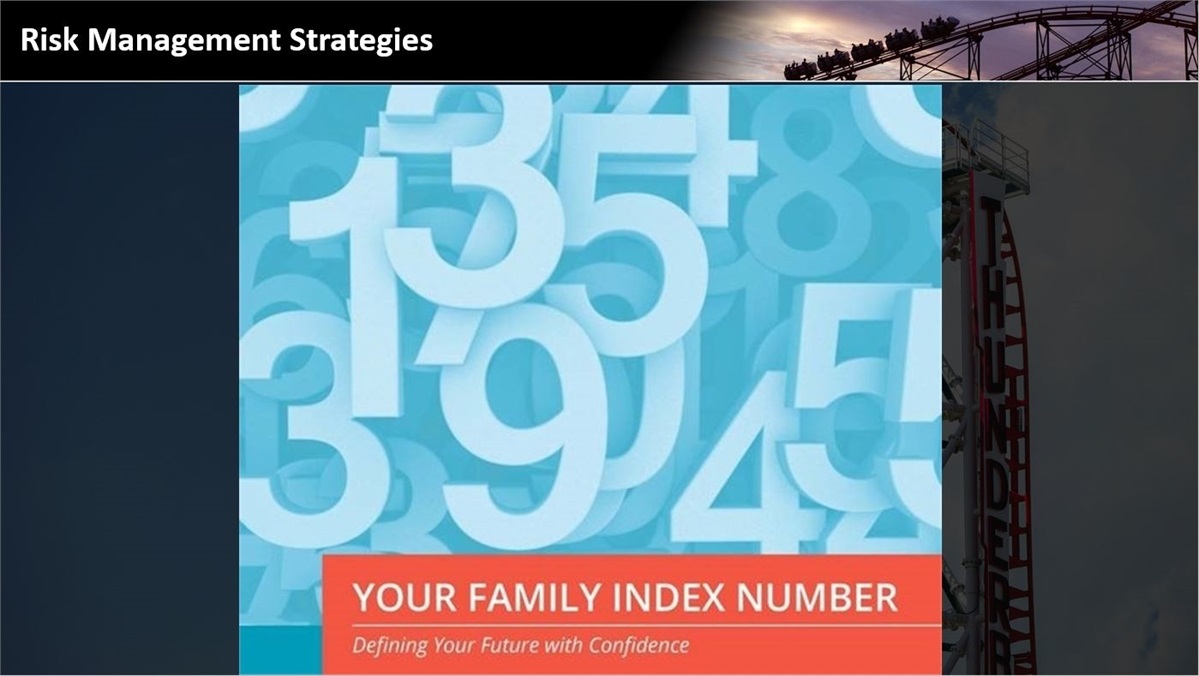 We've been consistently talking with clients about reducing their risk exposure to be closer to their family index number.  While we do not feel that a downturn is imminent, we prefer clients to be prepared ahead of time rather than having to be more reactive.  Sometimes it also takes time to shift a portfolio from a more aggressive posture to a more conservative posture.

When averages are down 10%, does it give you a hollow feeling in the pit of your stomach or keep you up at night? When you see the S&P 500 or Dow Jones Industrial average fluctuate up and down, consider how it affects your mood. Do you understand how it will truly impact your financial future along with your ability to achieve True Wealth? Empower yourself to focus on the only number that matters to you and your family: your Family Index Number.

In figuring your Family Index Number, the amount of certainty you want from your portfolio is considered against the amount of return you need to achieve your goals.  Sometimes these are easily determined and very compatible.  Sometimes we need to embrace more uncertainty to achieve our goals and sometimes we can afford and should embrace a more conservative posture.

Knowing this number will not only assist you in your quest to attain your goal of Living Well (however you define it), but it will also free you from the ups and downs of the market. Let us do your worrying for you so you can sleep easy at night. We want you to get to the end of your life and say, “I’m glad I did,” not “I wish I had.”