Last year around tax time I received a call from a concerned client regarding his projected tax bill.  He was quite confused when he relayed to me that his tax-preparer explained the unexpected tax liability of close to $5,000 was due to he and his wife’s previous year’s Roth IRA conversions of $13,000.  I was also surprised to hear this as the conversions in question came from non-deductible IRA contributions amounting to $13,000 they had made earlier in 2015.  Through careful planning, we had been performing a strategy known as a "Backdoor" Roth IRA Contribution.

With this client, we had been performing non-deductible IRA contributions for he and his wife since they became clients in 2009 in order to save additional funds on a tax-deferred basis as they were already maximizing 401(k) contributions.  Once the income limitations were abolished on Roth Conversions in 2010, we began converting these non-deductible IRA contributions to Roth IRA’s with little taxes due on the conversion.  Neither the client nor his wife had any IRA’s outside of the non-deductible IRA’s, so this wasn’t complicated by what is known of as the IRA Aggregation Rule which will be explained later.  Upon contacting their tax preparer about the Roth conversion in question, I learned they had not included the Form 8606  for non-deductible IRA contributions that were made and converted in 2015 on the current return.  I explained the situation to the CPA and he was able to complete the Form 8606 for the previous contributions to show that most of the $15000 that was converted should have been tax-free.  Only the difference between what they had both contributed (13,000) and what was converted ($15,000) or about $2,000 was taxable as income for them.

Watch out for the IRA Aggregation Rule and Pro-Rata Taxation 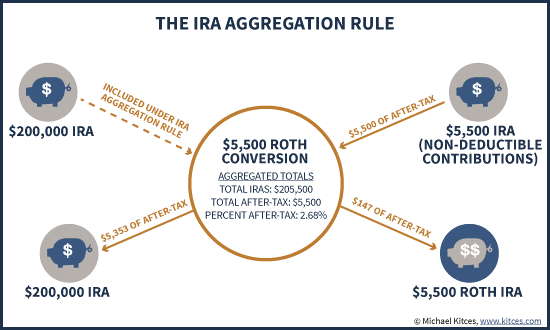 Those that have IRA’s already may still be able to take advantage of this through proper planning.  Since only IRA’s (Traditional, SEP & Simple) are subject to IRA Aggregation, 401(k)’s, 403(b)’s, Profit Sharing Plans, etc. are not included in the calculation.  If your employer allows rollovers into their plan, you can rollover any other IRA’s into your plan at work.  401(k)’s and other like plans will only allow pre-tax contributions to be rolled in. This would allow you to convert only the non-deductible IRA to a Roth IRA allowing for a potentially tax-free conversion.

Could “Backdoor” Roth IRA Contributions Get Caught in IRS Crosshairs?

For the time being, the Backdoor Roth IRA is a legitimate strategy for many high earners to get money into after-tax accounts.   Some financial advisors and tax experts have pointed out the potential for such transactions to be disallowed in the future.  Under what is referred to as “Step Transaction Doctrine”, the Tax courts have ruled previously that transactions performed in rapid succession with no business purpose could incur further scrutiny and be deemed impermissible. In order to protect against such a transactions being disallowed due to potential scrutiny in the future it is advisable to allow any non-deductible contributions an incubation period of at least one month prior to performing the Roth Conversion. 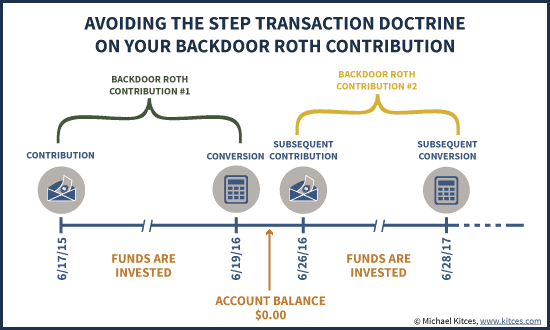 Using non-deductible IRA contributions and later converting into Roth IRA’s while paying little to no taxes can be a worthwhile strategy for those that would like to access Roth IRA’s but are currently restricted from making direct contributions due to their earnings.  Implementing such a strategy should only be considered upon consulting with a qualified tax and/or financial professional.

Please remember that past performance may not be indicative of future results.  Indexes are unmanaged and cannot be invested into directly. Index returns do not reflect fees, expenses, or sales charges. Index performance is not indicative of the performance of any investments. Different types of investments involve varying degrees of risk, and there can be no assurance that the future performance of any specific investment, investment strategy, or product (including the investments and/or investment strategies recommended or undertaken by Franklin Wealth Management), or any non-investment related content, made reference to directly or indirectly in this blog will be profitable, equal any corresponding indicated historical performance level(s), be suitable for your portfolio or individual situation, or prove successful.  Due to various factors, including changing market conditions and/or applicable laws, the content may no longer be reflective of current opinions or positions. Moreover, you should not assume that any discussion or information contained in this blog serves as the receipt of, or as a substitute for, personalized investment advice from Franklin Wealth Management.  To the extent that a reader has any questions regarding the applicability of any specific issue discussed above to his/her individual situation, he/she is encouraged to consult with the professional advisor of his/her choosing. Franklin Wealth Management is neither a law firm nor a certified public accounting firm and no portion of the blog content should be construed as legal or accounting advice. A copy of Franklin Wealth Management’s current written disclosure statement discussing our advisory services and fees is available for review upon request.