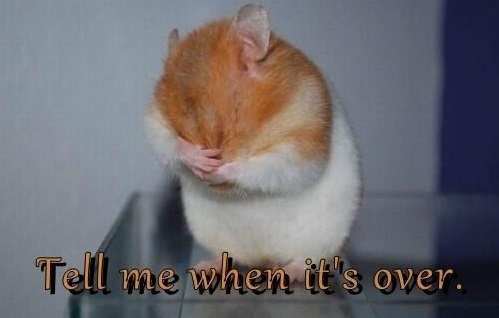 “Courage is rightly esteemed the first of human qualities because it is the quality which guarantees all others.”

It seems all of us experience the strange need to watch car wrecks, disasters and the misfortunes of others from time to time.  Bad news always seems to get better ratings than good news.  Occasionally stopping to view the carnage causes us additional wrecks and misfortunes or creates more worry about things that we can do little about.

Sometimes we can help if we keep a level head or encourage people to rise above the occasion.  We saw this in Chattanooga recently after the shootings of our military heroes a couple of months ago.  We also work extra hard at Franklin Wealth to encourage others to focus on the long term and stay positive around September and October most years.   These selloffs do not occur every year, but they come often enough that we have become accustomed to making preparations and making adjustments before, during and after to help weather the storm.

In the twenty plus years that I have been working with clients, these selloffs of 10% or more have occurred  anywhere from one year to five years apart from each other.  In July we were noting that we had been waiting almost four years since the last selloff and that we felt some people were wanting to take more risk than we thought they could easily stomach.

The current selloff has not been as deep as many in the past, but the volatility readings were higher than any we have witnessed since 2008.  We have found that on market drops of over 10% with high volatility readings that it usually takes about two months to finally find or return to the bottoms before the market rallies.  If we are experiencing a correction in the midst of a bull market, we usually bottom in October with the markets dropping an average of 1.7% below the initial low.  The following chart shows what we can expect. 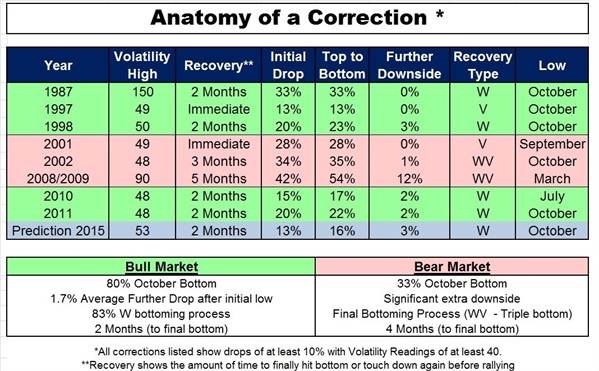 (Past Performance does not guarantee future results)

For many reasons, we feel we are experiencing one of many corrections we typically experience during an ongoing bull market.  For those worried that we are about to enter another 2008 type situation, I provide this chart that comes from Charles Sherry.  If you don’t feel like reading it, it says that most everything is completely different. 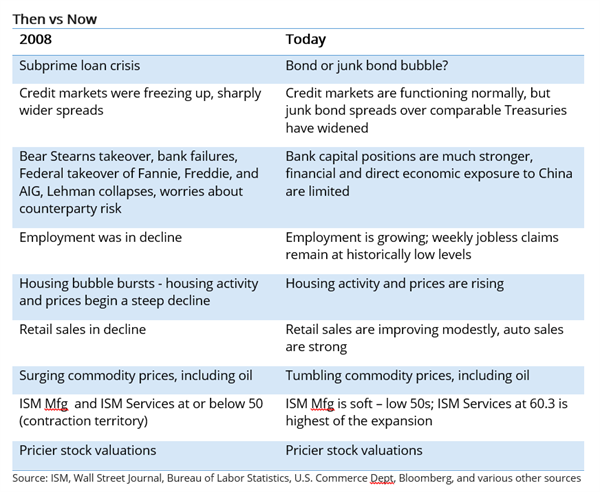 Our process involves the following:

Step 3:   Finish re-positioning to get more aggressive after second pull back and the start of the recovery

Its during these selloffs that we need to remember to be steadfast and have faith, that just like every other time we have experienced these selloffs during our lifetimes, we will see the recovery on the other side.   One of the core principles that all successful long-term investors must exercise on a regular basis is the principle of courage. Without courage you will achieve nothing in life worth having, personally or professionally. Volatility is the market’s way of testing your level of commitment and courage. A Roman author in the 1stcentury BC captured this perfectly: “Anyone can hold the helm when the sea is calm.”

The historically above-average returns of the stock market only come to those capable of exercising courage. Everyone else should simply park their assets down at the local bank, where an annual erosion of purchasing power is virtually guaranteed.

By the way, volatility does not equal loss, unless of course you sell! Author Nick Murray nicely summarizes this concept when he writes that “the ability to distinguish between volatility and loss is the first casualty of a bear market.” Mr. Murray reminds us how the legendary buy-and-hold investor Warren Buffett handles volatility:

There is much we can learn from the “Oracle of Omaha,” not least of which is the above!

Market corrections happen often and even in good years, including fairly significant intra-year declines in recent years of strong returns, such as 2010 and 2012.

Volatility does not equal loss unless you sell out.

Remember the bottom line: Market corrections do not equal financial loss…unless you sell out.

1.     We don’t see this correction leading to a bear market (defined as a loss of 20% from the high) because the U.S. economic data remains solid, commodity prices and inflation are low, and monetary policy will remain extremely accommodative … even if or when the Fed hikes rates.

2.     Do an autopsy on your recent behavior. Let’s just say that you sold at the very bottom on Monday. Okay, it turns out that there is something very valuable to be learned from this.  People who find themselves in this situation are going to set themselves up for success going forward because they are either going to realize the true benefit of having and sticking to a longer term plan, or they are going to realize that they never had the stomach for the risk in the first place and will do a complete reassessment of their entire situation.  There is nothing wrong with anyone determining that the level of risk they had was much higher than what they were comfortable with.  Go back to the drawing board and figure out the right combination that supports the plan and overall objective.

3.     China and the Emerging Markets (EM) – We think that sentiment in general is at a rock-bottom level and this despair is overblown. We are not putting cash to work in either place, but are just pointing it out.  China reminds us of Japan in the late 1980s currently.  While we believe they should recover faster than Japan, we also remember the Japanese stock market malaise of the early 1990s having little impact upon us here in the U.S.

4.     With all of this volatility, it’s important to pay attention to two huge global economic engines: the U.S. and Europe. While it’s hard to really focus on this, both are in good cyclical shape and foreshadow better global trade ahead.

5.     We have noted high dividend paying stocks have suffered more than the rest of the market.  We would expect many of these types of investments to look much better over the next few years than they have over the last few.  It has been a long time since we have seen yields over 7% in our Income Model.  Many of the holdings are also trading at multi-year discounts to their Net Asset Values currently.

7.     We made some changes to our portfolios recently, but our overall investment stance remains decisively bullish.

8.     The momentum camp and the technical analysts have turned more pessimistic while those in the value camp, i.e. Warren Buffett and others have gotten more bullish.  We tend to agree with Buffett. 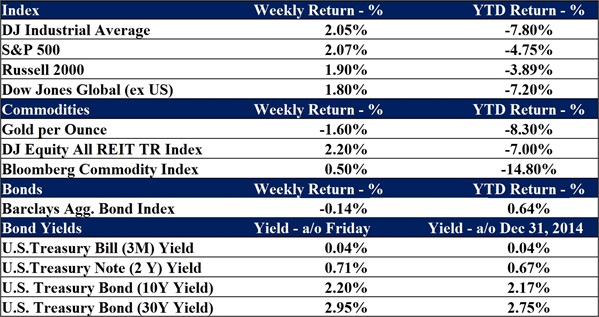