Is it Time to Shoot the Moon? 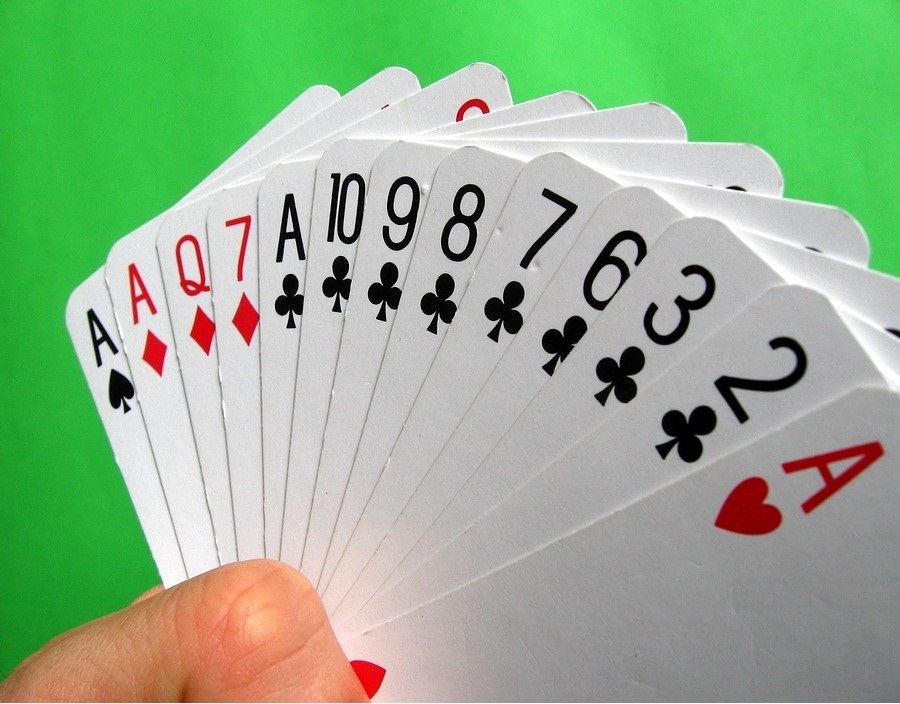 Our office celebrated one of our “Fun Fridays” this past week. Lately we have been trying to do things outdoors and stay safe in the current environment. It was raining this past Friday afternoon, so we improvised and decided to play cards. It has been some time since I’ve played Hearts but it didn’t take long for the rules and the strategy to come back to me. The game is one that you can easily play with more than 4 people and employs a good combination of skill and luck to make things exciting.

Of course, the strategy in Hearts is to take as few points as possible with each heart taken costing one point and the queen of spades costing 13 points. As you grow more skilled at the game you learn the nuances of passing cards and learn that voiding yourself of spades opens you up to more easily take the queen as others can pass you the highest spades or worse yet the queen herself.  Nothing is worse in Hearts than having to play the Queen of Spades out of your own hand and taking the thirteen points. The key is to remain flexible considering the other players can pass you almost anything.

Most of the time, a player will do his or her best to get rid of their high cards early so that they are taking tricks before any hearts are played. Occasionally you get one of those rare hands that allows you to “Shoot the Moon”. You may be dealt only high cards or happen to pick up most of the hearts and a few high cards that allow you to take all the tricks. More likely you are dealt a hand that you don’t really like and you start taking most of the tricks and realize that if you play the remaining cards in your hand correctly, you could very easily take all the points. If this happens and you are able to “Shoot the Moon”, everyone else gets 26 points and you take zero. It’s fun to “Shoot the Moon” but also dangerous because if you go for it and miss, you invariably end up with most of the points and could end up losing.

None of us was able to “Shoot the Moon” on Friday. I never had a good opportunity to try and stuck to my typical strategy of taking as few tricks as possible. But getting a chance to play again got me thinking about how in the U.S. stock market today, most people are trying to “Shoot the Moon”.

How is an investment strategy similar to playing Hearts?

In investing, we want to make as few unforced errors as possible. Diversification allows us to reduce risks without hurting returns in the long run. Typically, we want to think like a business owner and consider that we are buying small pieces of multiple quality businesses when the market offers them to us at good to great prices. But there are times when the markets enter a period of what Mr. Greenspan used to call “Irrational Exuberance” when things are seemingly “different this time”.

Many of us can remember 1999 when Y2k was going to cause all the worlds’ computers to shut down on January 1st, 2000 and everyone was scrambling to make sure they upgraded before this happened. It spurred a technology spending wave and a speculative bubble in all things related to the internet. Not until the bubble burst over the next two to three years did people come to realize how crazy some of the valuations had become.

The current frenzy for all things digital is not to the fever pitch that we reached in late 1999, but we are seeing some of the same craziness. Without sports to entertain, it seems everyone is turning to the stock market. Momentum is currently the only strategy that seems to be working with the thought that if it goes up it will keep going up forever.

In the past year, the price of Tesla’s stock has appreciated by over 1000 percent. The company is currently worth more than GM, Ford, Toyota, Volkswagen and Honda combined when we study the market capitalizations. Further comparison shows Tesla’s sales are only one fifth of Ford’s and less than one tenth of Toyota’s annual sales. Valuing Tesla at over a thousand times earnings and fifteen times sales means that it will take a thousand years for the company to earn what an investor pays for it if the earnings do not grow. If the earnings and revenues continue to grow at the same rate revenues have for the last five years, it would still take over 20 years for the combined earnings to catch up to the current market capitalization. 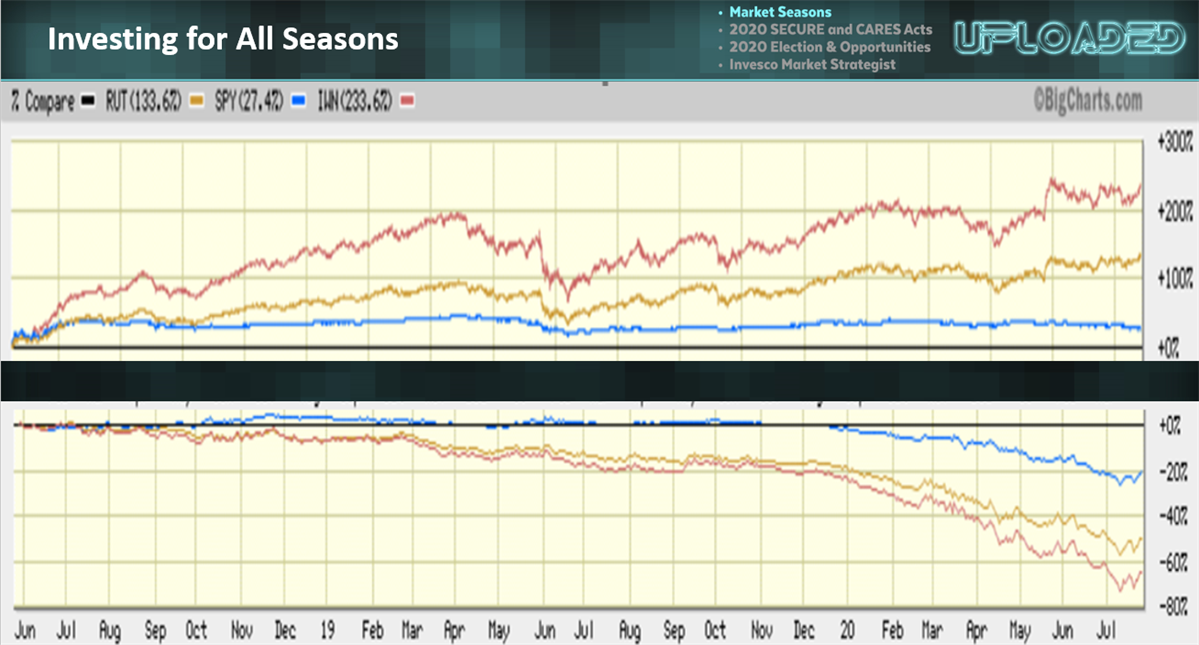 The chart above shows how small companies have appreciated versus the Nasdaq from 2000 to 2018, out-performing by close to 250% over this period. Things have flipped over the last two years with the Nasdaq outperforming by over 60%. The last time we saw something like this happen was in the late nineties. 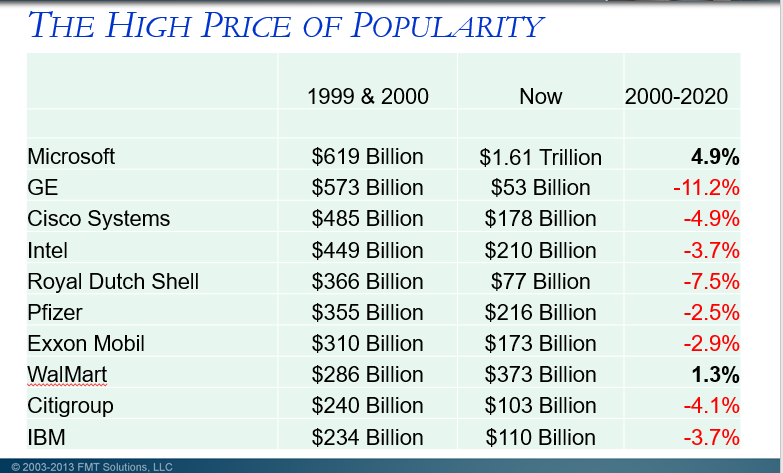 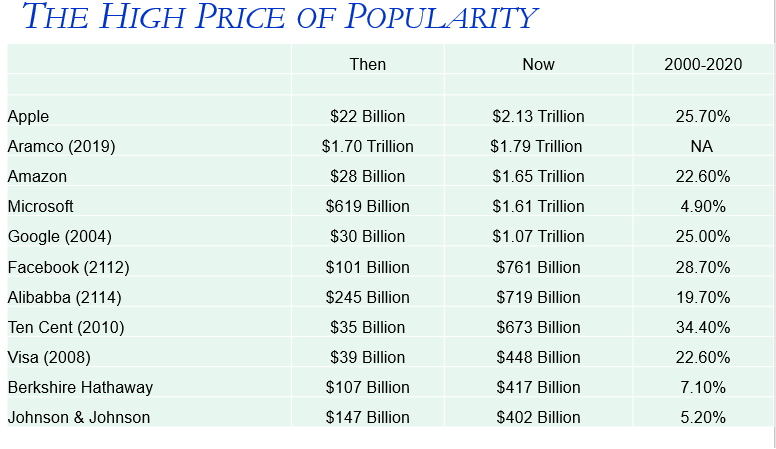 The federal reserve has slashed yields to effectively zero and has been buying bonds, with fiscal and monetary spending of over $3 billion in 3 months and another spending spree likely in the works. This money has found its way into the stock market, but just the most popular growth names and speculative areas.  Companies that pay dividends were hurt more than most in the downturn and have not fully recovered. Buying good companies at good to great prices has not been this out of favor since the 1930s. Classic diversification has stopped working over the past couple of years.

Should we abandon income stocks, diversification and investing for value?

For the time being it is hard to ignore the trends. As long as Federal Reserve and Congress are doing all they can to stimulate, the markets will benefit. But we have to be wary of a change in the wind. Eventually the stimulus ends, and the largest most popular companies may suffer the same fate they did after the last technology bubble burst. I would say that Value Investing is not dead. It is interesting that most institutional investors and insiders have remained on the sidelines since early April waiting for another buying opportunity.

What do we currently expect?

When markets recover after a bear market, the smaller most beaten up companies tend to appreciate the most. The markets are acting more like they do at the end of long bull markets than is typical during or after a recessionary period and a market selloff. Unprecedented stimulus efforts have made all the difference. With rates at effectively zero, ballooning U.S. government debt and a bloated federal reserve balance sheet, the dollar is likely to start declining in value. Gold and other precious metals have already grown attractive. Other countries are recovering faster than the U.S. and may provide more opportunities in the near future.

Technology and growth companies in general will likely perform as they did in 1999 and 2000, but the party will eventually end. Those who wish to “Shoot the Moon” speculating in this market should make sure to remain flexible and at least somewhat diversified. Looking to the chart below, we can see that those who failed to do this in the 1990s suffered during “the lost decade” of the 2000s while those who remained diversified were rewarded. 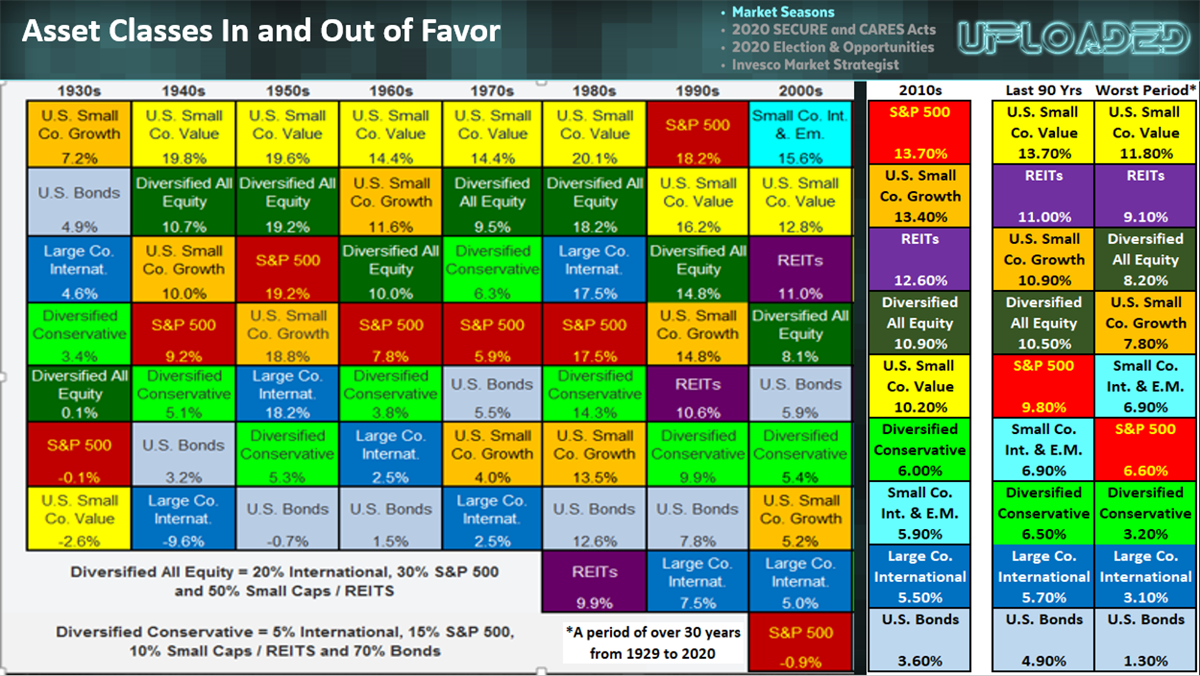 “From my earlier failures, I knew that no matter how confident I was in making any one bet I could still be wrong, and that proper diversification was the key to reducing risks without reducing returns.” -- Ray Dalio, CEO Bridgewater Associates