Of Pumpkins and Mice

"In this business if you're good, you're right six times out of ten.

You're never going to be right nine times out of ten."

Last year was a “Cinderella at the Ball” year for those investors who were fully committed to US Stocks and took a 100% U.S. equity exposure.  For those who diversified into anything else, the party was not nearly as fun.  We want to be out the door before the clock strikes midnight.  We are currently heading in that direction and have already started to move to a more conservative posture making a couple of adjustments last week and looking for a chance to make a graceful exit.  We have already sold some positions in our stock models and will be exiting others as they hit our price targets. Our first round of mutual fund model adjustments has been made while others are planned for the coming weeks.

As Warren Buffett has been quoted, “The line separating investment and speculation, which is never bright and clear, becomes blurred still further when most market participants have recently enjoyed triumphs. Nothing sedates rationality like large doses of effortless money. After a heady experience of that kind, normally sensible people drift into behavior akin to that of Cinderella at the ball. They know that overstaying the festivities, that is, continuing to speculate in companies that have gigantic valuations relative to the cash they are likely to generate in the future, will eventually bring on pumpkins and mice. But they nevertheless hate to miss a single minute of what is one helluva party. Therefore, the giddy participants all plan to leave just seconds before midnight. There’s a problem, though: They are dancing in a room in which the clocks have no hands."

The desire to take more risk is a common theme we are seeing currently with clients.  Over the years we have found when normally rational people irrationally want to throw in the towel after a market drop, we are typically close to a bottom.  Conversely, if the crowd wants to get more aggressive than they have been historically we are typically close to a top.  The data and our recent experiences suggest the latter.

WHEN THE CLOCK STRIKES MIDNIGHT

How do we know the time of the night when looking at a clock with no hands?  We look for other evidences of the current hour.  Most investors are currently bullish but not overly so.  Volatility has been moving higher lately, but this does not concern us yet.  Stock valuations are higher on a relative basis than they were a year ago, but these levels are not particularly worrisome.  So what are we concerned about?

Market indices are no longer moving upward at the same rate.  We are seeing a deceleration with upward trend lines recently violated.  What we are most concerned about at this time is the amount of risk and leverage that the investing public as a whole is assuming.  Nothing speaks louder to this than the amount of margin debt outstanding.

The New York Stock Exchange publishes end-of-month data for margin debt on the NYX data website where we can find historical data back to 1959. Let's examine the numbers and study the relationship between margin debt and the market using the S&P 500 as the surrogate for the latter. 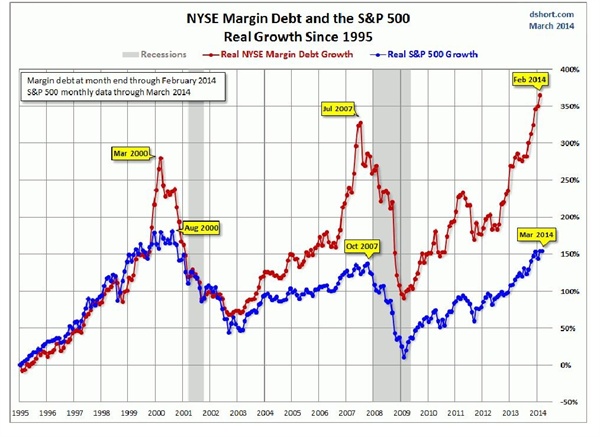 The accompanying chart shows the percentage growth of the two data series from an arbitrary 1995 starting date adjusted for inflation to today’s dollar using the Consumer Price Index as the deflator.  We were well into the Boomer Bull Market that began in 1982 and approaching the start of the Tech Bubble which shaped investor sentiment during the second half of the decade. The astonishing surge in leverage in late 1999 peaked in March 2000 (the same month that the S&P 500 hit its all-time daily high) although the highest monthly close for that year was five months later in August. A similar surge began in 2006, peaking in July 2007, three months before the market peak.  Margin debt at that time grew at a rate comparable to the market from 1995 to late summer of 2000 before soaring into the stratosphere.

After the market low of 2009, margin debt again went on a tear until the contraction in late spring of 2010. The summer doldrums promptly ended when Chairman Bernanke hinted of more quantitative easing in his August 2010 Jackson Hole speech. The appetite for margin instantly returned, and the Fed periodically increased the easing until the beginning of tapering purchases supposedly now underway.

What is painfully evident over the last 20 years is the correlation with margin debt levels and market tops.  Margin debt increases rapidly as investors assume more and more risk seeking greater returns toward the end of a market advance.  Assumption of leverage by borrowing typically reaches a peak just before the market hits its highs and then falters.  The latest data puts margin debt at an all-time record high, not only in nominal terms but also in real (inflation-adjusted) dollars.  This is definitely disturbing to us. 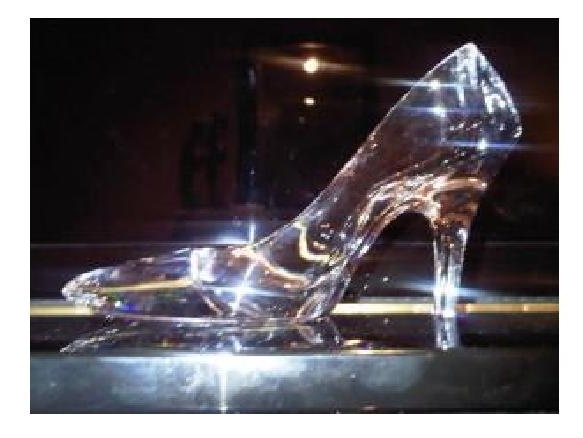 FINDING THE OWNER OF THE GLASS SLIPPER

Investors are going crazy for stocks, piling into individual stocks and equity mutual funds at a near record pace. Investor sentiment polls confirm the high level of bullishness. Margin debt is at record highs. Brokerage firms and polls of investor groups show individual investors have unusually high portfolio allocations skewed to stocks and away from bonds and cash.

Households continue to pull money out of municipal bonds, of which they are the largest holders. Thomson Reuters reported that new municipal bond sales hit a 14-year low in February, “as individuals continue to flee from bonds to put their money into the rising stock market.”

So who is selling the stock to those clamoring for more? Someone must be given that stocks are marginally down for the year so far. Who is buying the bonds individuals are fleeing from, since demand for bonds seems to have them rising in price in spite of the selling?  It’s the institutions and professionals that, in many cases, have voted in special provisions to allow them to increase their holdings in municipal bonds and other investments they feel are undervalued because of the bond panic of 2013.  They are selling the biggest winners of the past year to buy the best values available today because the price is right.

This year, those investments that performed the best last year have lagged, and those that hurt investors the most have recovered nicely.

So what are we doing now?  We continue to stay diversified with our investment portfolios.  We are still focused first and foremost on protecting investors, knowing the best way to make money in the long run is to protect profits.  We continue to focus on quality and reasonable valuations.  We continue to be cautious.  We consistently maintain the contrarian viewpoint in much of our thinking knowing that the crowd is almost always wrong (as far as investing is concerned), especially at the point of maximum optimism or pessimism.

By taking this approach we may not experience as much upside, but we are more protected on the downside and have cash available when a buying opportunity presents itself.

"In trading and investing it's not about how much you make,

but how much you don't lose"

Please remember that past performance may not be indicative of future results.  Different types of investments involve varying degrees of risk, and there can be no assurance that the future performance of any specific investment, investment strategy, or product (including the investments and/or investment strategies recommended or undertaken by Franklin Wealth Management), or any non-investment related content, made reference to directly or indirectly in this blog will be profitable, equal any corresponding indicated historical performance level(s), be suitable for your portfolio or individual situation, or prove successful.  Due to various factors, including changing market conditions and/or applicable laws, the content may no longer be reflective of current opinions or positions.  Moreover, you should not assume that any discussion or information contained in this blog serves as the receipt of, or as a substitute for, personalized investment advice from Franklin Wealth Management.  To the extent that a reader has any questions regarding the applicability of any specific issue discussed above to his/her individual situation, he/she is encouraged to consult with the professional advisor of his/her choosing. Franklint Wealth Management is neither a law firm nor a certified public accounting firm and no portion of the blog content should be construed as legal or accounting advice. A copy of Franklin Wealth Management’s current written disclosure statement discussing our advisory services and fees is available for review upon request.