Politics and Populism in 2020: How Will This Impact the Markets? 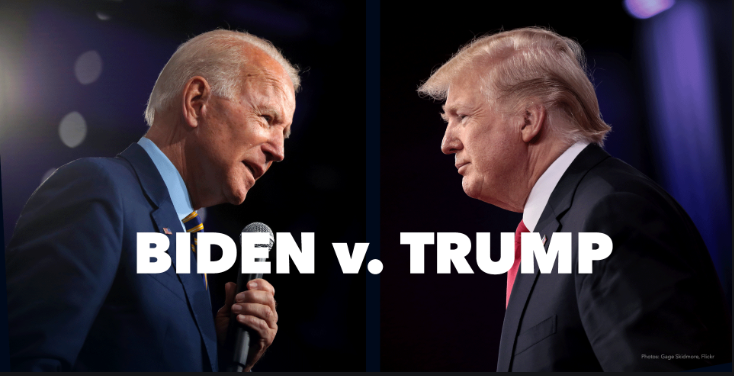 "Those who do not learn history are doomed to repeat it." - George Santayana

Who doesn't love getting something about politics in their Facebook feed?  I've unfortunately grown accustomed to texts and robo-calls from my "favorite" political candidates as well. Turning on the television these days, we are bombarded by political advertisements and politically charged news stories.  It has grown hard to separate the "truth" from opinion, with spurious polling and slanted statistics.

Have we ever had a more divisive political climate than we have right now?

These days expressing a political opinion can lead to loss of friendship. It seems that the political parties are growing more extreme and apparent discontent with the system has never been more pronounced. Citizens of the U.S. and other countries around the world are fed up with the "elites" who have seemingly ignored the common man. Rallies turn into riots and there is increasing voice given to "draining the swamp" and "defunding governmental authorities".

When have we ever seen such discord and political hostility?

I would encourage anyone asking these questions to take time and study the 1930s. World War I had left most of the globe in turmoil with severe sanctions on countries who lost the war. After the stock market crash in 1929, the U.S. led the rest of the world into a global depression that was made more severe by the dust bowl in North America and a famine in Russia. Citizens of countries around the world became disenchanted with governments that did not do enough to help them. As can be seen from the chart below, the U.S. in the 1930s saw a divide between those more conservative and those less conservative that is similar to what we are seeing now. Parties refused to work together, and partisan politics grew increasingly common.

What causes this great divide between the political parties?

Many believe the cause is increasing income and wealth inequality. As can be seen from the chart below, the disparity between the top 10% of U.S. income earners and the bottom 90% has never been greater, except for the 1930s. Likewise, the wealthiest 0.1% of Americans are worth almost as much as the bottom 90%. Globalization and monetary stimulus have improved the lives of many, but many citizens of developed countries around the world are feeling disenfranchised, as can be seen by the continued emergence and dominance of populist leaders and movements.

What are the characteristics of Populism?

Populism is a rebellion of the common man against the elites and against the prevailing system. Depending on how well-developed the system is tends to determine whether the system bends or breaks under the pressure of the rebellion. It also depends on how respectful of the system the populists who gain power are.

Populism is a political and social phenomenon that arises from the common man being fed up with 1) wealth and opportunity gaps, 2) perceived cultural threats from those with different values in the country and from outsiders, 3) the "establishment elites" in positions of power, and 4) government not working effectively for them. These sentiments lead the populus to put strong leaders in power, who tend to be confrontational rather than collaborative and exclusive rather than inclusive. This tendency leads to conflicts between political factions internally and internationally.  Unfortunately, these conflicts have a tendency to escalate. We want to be vigilant to do what we can to discourage such extremism.

What should we watch for?

Within countries, escalating conflicts lead to strikes, protests and riots that prompt stronger reactions and growing pressure for restraint. In the past, influencing and in many cases controlling the media, has become a key aspect of controlling the conflicts. In many cases, these conflicts have led to civil wars, military coups and dictatorships in an attempt to bring order out of disorder. We want to monitor how the conflict is handled. Can opposing forces coexist and make progress or do they increasingly "go to war" to block each other and cause gridlock?

In Italy, Germany, Spain and Japan, dictators came into power. It also led to the rise of Communism in the U.S.S.R., Cuba and Venezuela in more recent years. Other common themes of populism include protectionism, nationalism, militarism, movements against immigrants and outsiders and the suppression of individual liberties.

The sentiment that history repeats aspires to common sense and is hard to disagree with. In the history of the United States and Europe, wars have ended with confiscatory terms of government surrender inevitably breeding more wars. Revolutions, like those in France and Russia, that gave an individual absolute power-Napoleon and Stalin, respectively-inevitably end up as failed empires and brutal dictatorships.

What election results are we most concerned about?

During the 1920s and 1930s many countries allowed for temporary "emergency powers" to handle crises. Too much power in the hands of one political party led to leaders and members of opposing parties being labeled as "enemies of the state" and personal freedoms were severely curtailed. Allowing one party to "sweep" the election, controlling both legislative houses and the electoral branch would lead some politicians to enact sweeping changes citing "electoral mandate". Politicians have also expressed the opinion that any crisis is "a terrible thing to waste." Too many countries have fallen into the hands of despots and oppressive regimes because they took advantage of historical crises.

What political party provides the best and worst markets?

Over the last century, presidents of the Democratic party have been in office during the best periods. Conversely, Republican control of legislative branch has dominated the best market periods. In general, the U.S. markets tend to perform best when there is a balance of power. If we are to study the chart below, recent history tells us a Democrat presidency tempered by a Republican controlled Senate is the best recipe for strong market performance. The same chart tells us a Republican presidency coupled with a Democrat controlled Senate would not be as profitable. 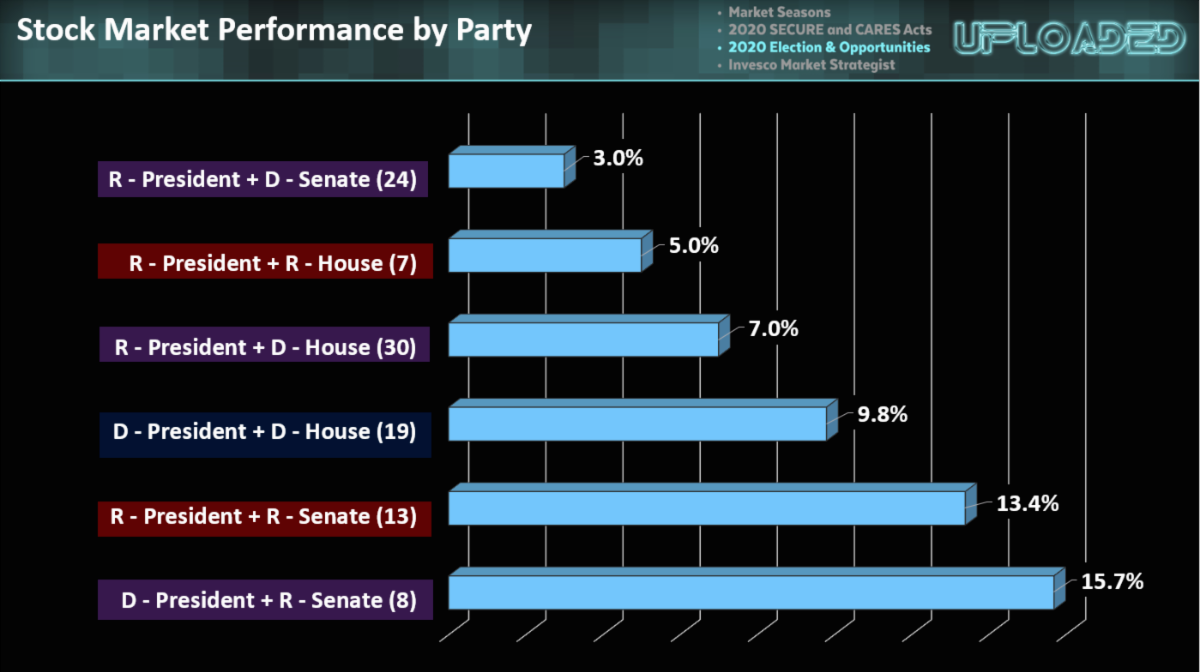 Can we predict our next U.S. president?

In the last few elections, polling and media coverage has given many candidates a false sense of security going into elections. Many presidential elections have been lost when the Electoral College has decided a new President who was not elected by majority vote. Lately, handicappers in Las Vegas have been more accurate in their predictions than those in Washington, D.C. One indicator seems to have stood the test of time. As shown below, in 20 of the last 23 elections, if the stock market was up during the previous three months the incumbent party won the White House. If the stock market was down the opposing party won. 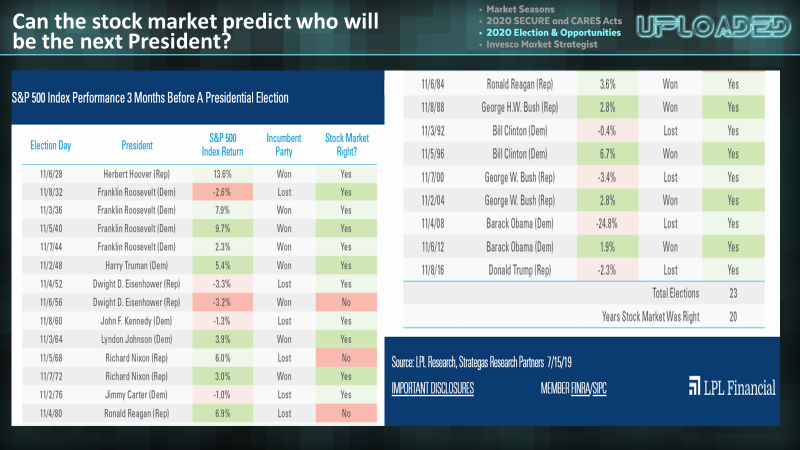 Should we eliminate the Electoral College?

Two of the last five elections have been decided not by the popular vote but by the Electoral College. The majority of voters did not elect George Bush or Donald Trump for their first terms. This has led many to lobby for the elimination of what they feel is an outmoded system. Our founding fathers established this system for a reason, however. They established the legislative branch to appeal to the majority of the U.S. population in the House of Representatives where states with a larger population have more votes. They also wanted to make sure that more rural States without large populations were not without representation. The smaller states can find their voice in the Senate. The Electoral College is designed to work the same way. Eliminating the Electoral College would be akin to eliminating the Senate and would leave the smaller states without a voice. It would encourage politicians to ignore wide swaths of the country; Elitism with power going to the large population centers.

Recently Albert Mohler stated, "Our constitutional system is a Democratic Republic, and it is so for a very good reason. And that is: Those who were the framers of the American experiment in representative democracy understood that democracy has to be protected from mob rule and, furthermore, it has to be protected from moments of emotional intensity in which something less than calm reason could prevail. The requirement in terms of amending the Constitution ensures that deliberative reason and long debate would be necessary. And that's one of the reasons why we need to understand that even if the focus is currently on the Electoral College, the background to this is the genius of the framers of the American Constitution and the enduring authority of that written document. Flawed? Yes. Historically old? Yes, and increasingly so. But essential to our understanding of how democracy in representative government is to be protected? Absolutely."