The Fed, The Donald and The China Syndrome 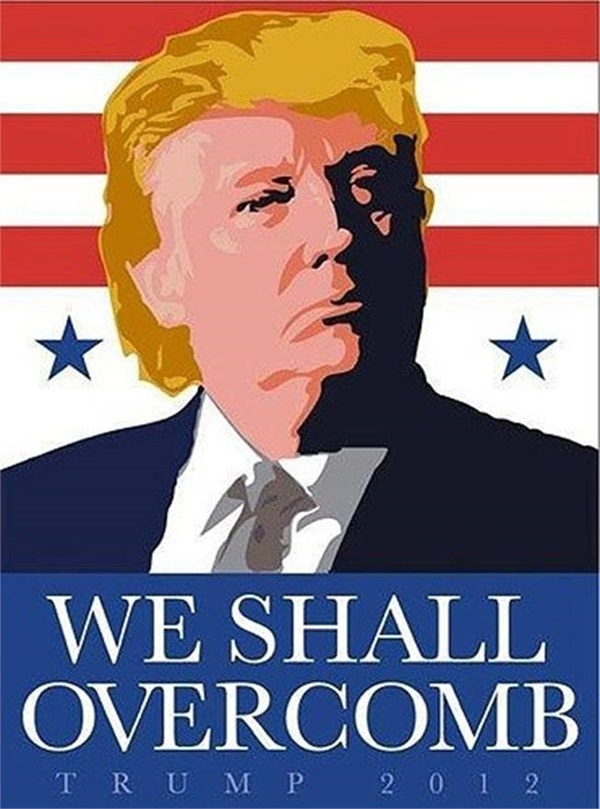 IS THE DONALD GOOD FOR AMERICA?

Despite grabbing most of the headlines and leading in many of the polls prior to the last debate, Donald Trump is not expected to win the Republican nomination. But many believe that Trump has done the electorate a “big favor by bringing up issues that have been conveniently buried for quite some time.”

Jeff Gundlach, Chief Investment Officer for Doubleline Capital is considered by some to be the new "Bond King" now that Bill Gross has stepped down from Pimco and is approaching retirement.  We like to review what he has to say about bond markets and Fed action during times like these.

According to Jeff Gundlach, Trump is right when he asserts that China’s infrastructure is better than that of the U.S. Quoting Trump, Gundlach said that China’s “130 shiny new airports” and “cities with glistening buildings” outclass the “collapsing bridges” and “airports that are a joke” here in the U.S. And, ironically, according to Trump, the U.S. owes China more than $1.4 trillion.

“There seems to be something really weird about this picture,” Gundlach said in a talk last week. “I’m glad to see Mr. Trump is talking about these things simply because these are facts that have been there for all to see but getting very little reporting.”

But Gundlach also criticized Trump, calling him a “full-on protectionist.”

“We all learned in high school that it was a bad idea in the wake of flagging global growth to go to protectionist steps,” Gundlach said. Gundlach called out Trump’s plans to “build walls to keep people out and put tariffs and taxes on other countries.” Those steps might help our country’s competitiveness, but they would not increase global economic growth,

Gundlach’s comments about Trump were a sidelight to his main message – the assertion that the Fed should not raise rates and his prediction that it would not.

WHAT SHOULD THE FED DO NOW?

Economic weakness, market vulnerabilities and a lack of inflation argue against an increase in interest rates, and Gundlach cited numerous examples of each.

“I don’t think the Fed will be able to raise interest rates this month, and I don’t really think they’re going to raise them this year,” he said. “And if they do, I think it will be a real problem.”

According to Gundlach, the World Bank and the IMF also advised the Fed against raising rates, which could risk global turmoil in the financial markets and in the emerging markets in particular.

One key reason, according to Gundlach, is lack of growth in nominal GDP, which is growing at only 3.7% annually. That’s less than the rate of 4.1% in September 2012 when the Fed began its third quantitative easing program (QE3). Gundlach said his team at DoubleLine has shifted its focus to nominal (instead of real) GDP because “we don’t live in an inflation-adjusted world.” 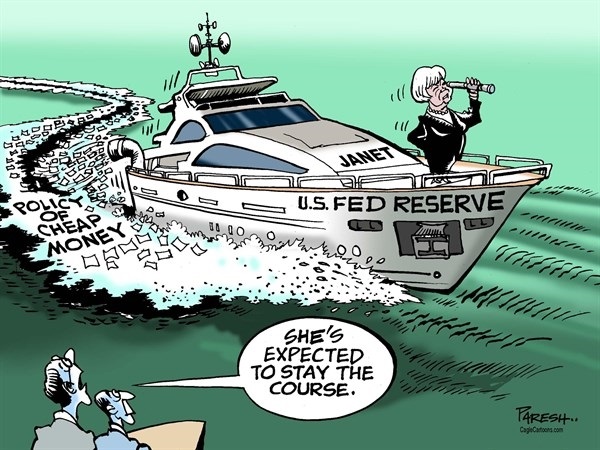 Gundlach cited an article that appeared in Bloomberg earlier this year, which showed that the Fed has raised rates 118 time since 1948. The average nominal GDP growth at the time of those hikes was 8.6%, more than twice today’s rate. Only two of those hikes occurred when growth was less than the current rate of 4.7%.

Lack of inflation argues against a rate hike. Gundlach said that commodity prices, measured by the CRB index, are at the lowest point in the past 10 years. The Fed’s preferred inflation indicator, the core PCE, is at the lowest level since 2011 and 50 basis points lower than when QE3 begin three years ago. The core CPI has risen slightly in the last three months, and Gundlach said the disparity between it and the PCE is due to a difference in the weighting of medical-care expenses.

Inflation expectations, as measured by the TIPS market, have also been declining. Low inflation has been driven by weak oil prices, which Gundlach said may go lower.

Emerging-market equity prices are at a six-year low, he said, and are sending a “dangerous signal” to the Fed. The warnings from the IMF and the World Bank were based, at least in part, on fears that a rate hike would trigger instability in those markets.

In March, Janet Yellen said she was fearful about raising rates because of the strength of the U.S. dollar. It has stayed strong, Gundlach said, giving the Fed another reason not to raise rates.

Hourly wage earnings have been stable with a very gradual increase since 2011, Gundlach said, which is one positive sign that would argue for Fed tightening. But that is belied by the employment cost index, which Gundlach said is now at its lowest point since 1982 when the data series began.

Gundlach reiterated a comment he made on July 15, the day that Yellen was appearing in a congressional testimony. He said that if you looked at charts of emerging market stocks, junk bonds, commodity prices and nominal GDP and you flew in from Mars, you would say, “My goodness I hope the Fed is easing.”

“All of these things seem to be screaming fairly loudly, ‘Dammit Janet, don’t raise rates,’” he said.

Many economists changed their views when the S&P 500 bottomed earlier this month, predicting that the Fed would not tighten. Since then, commodity and stock prices have risen.

But even if there were a 10% increase in stock prices and a move to $55 oil, Gundlach’s position would be unchanged.

“If that happened, then maybe the Fed would feel more emboldened to tighten,” he said. “But markets being where they are here September 8, I think the Fed is not going to raise rates nor should they.”

Aside from his comments about Trump’s trade policy recommendations, Gundlach expressed clear concern over recent developments in China.

Gundlach cited arrests of individuals by Chinese authorities over on-line rumors and other types of crackdowns. “This type of thing usually comes along simultaneous with tensions and unrest broadly speaking,” he said. Those actions are driven by weak economic growth, which Gundlach said is less than China’s publicly stated target of 7.5%.

Weak growth is being driven by the strength of the Yuan, which has appreciated by more than 10% relative to China’s trading partners, according to Gundlach. He said that other Asian currencies have been “systematically weak” since 2012, while China’s has been relatively strong.

Another concern about China today is the amount of margin debt.  Chinese margin debt went up five-fold from the middle of 2014 until the crash this spring, and now that leverage has completely unwound.

Real-estate construction, which had been a driver of Chinese growth, is waning.  The floor space of new buildings was growing at between 10% and 15% since 2009 – until this year, when it contracted by 11%,.

Gundlach mostly dismissed fears that China would sell some of its U.S. Treasury holdings to support its currency. He said those holdings have been mostly stable for the last several years and have not been a source of recent volatility in the U.S. bond market. 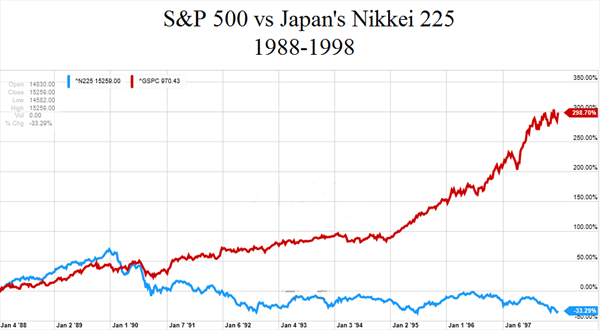 HOW WILL THE BUBBLE BURST IN CHINA AFFECT US?

Many of us remember the rise of the Japanese economic empire in the 1980's.  At that time they were buying everything with a booming economy and business acumen that was seemingly unstoppable.  What many did not foresee was the economic malaise that has infected the country since then starting toward the end of the decade.  Japan had an over-inflated real estate market to go along with an over-inflated stock market.  Markets tend to go to extremes.  Japan was not immune to this at that time and China is not immune to this today.  China's bubble has popped like the Japanese bubble popped over three decades ago.  How will this affect us in the United States?  We could look to the 1990's to see that the Japanese malaise had little effect on us in our country.  The world is much more interconnected today, but like the 1990's, the sickness is unlikely to have much effect on our shores outside of overall weakness in the price of commodities.  Some sectors in our country will be affected, but we expect the U.S. and European markets to continue to move forward whether economic improvement is evident or not in China. 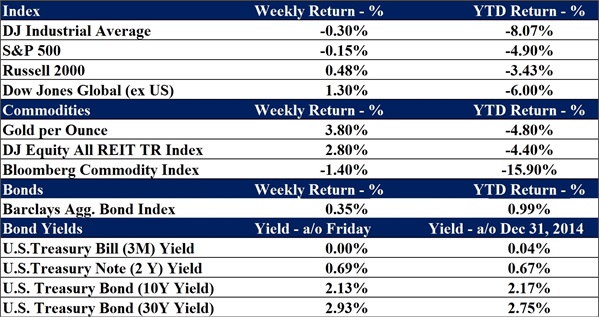