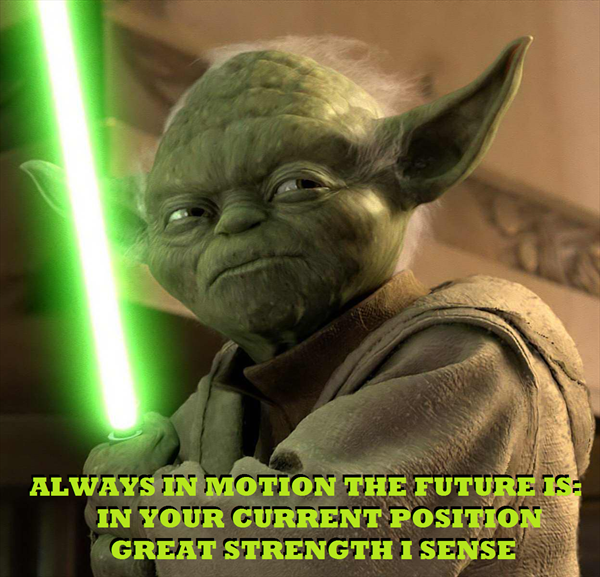 THE LIGHT HAS NOW TURNED GREEN?

Yoda in the Star Wars movies cannot predict the future with great certainty, but he is incredibly attuned to the present.  Likewise, we can read when things have already improved to the point where we are comfortable re-engaging, but knowing when this is going to happen weeks or months in advance is akin to guessing the daily temperature highs and lows on Signal Mountain six weeks from now.  We are currently more aggressively positioned and have been for the last few weeks.  The S&P 500 moved past its mid September rally high during the second week of October and we started repositioning in an effort to take advantage of this soon after.  Being more conservative and playing defense during the off months protected us during August and September.  We can always wish we were more defensive just after the crisis strikes but it is good to have repositioned in any event.  We did not expect this recent correction to develop into much more than it did, primarily because our economy is still relatively stable.  Yield curves and Leading Economic Indicators give us a good precursor to when things are deteriorating in these areas and we are still looking good.

What tends to do best during this time of the year?  Look to the Chart below from the Stock Trader's Almanac to see what has worked since 1990.

Click Here for a larger version of this chart.

Over 1,200 companies have reported their results for the quarter.  The percentage of companies beating their revenue estimates for the Q3 of 2015 stands at 46.9% which is currently below the average of the 60% that we’ve seen since 2000. It’s been a really poor showing for revenue over the past three quarters.

The percentage of companies beating their earnings estimates stands at 63%, which is now above the average of 62% dating back to 1998.  Last week we stood below the average so it was a nice move to the upside over the past week.  If the 63% reading holds, it will be the best reading since the Q4 of 2010.

Below is a chart that shows the spread between companies guiding future earnings higher or lower on a percentage basis. Up until the Q1 of 2014, the spread had been negative for the ten previous quarters, meaning there were more companies stating they would earn less in the upcoming quarter than the same quarter a year prior. That’s 2.5 years of pessimism coming out of corporate America.

Of the last 17 quarters, two were about flat and the rest were negative.  It’s interesting to me that companies are guiding lower as the market goes up.  If I see this invert, it will have my attention – it could be a good indicator of corporate over-confidence. 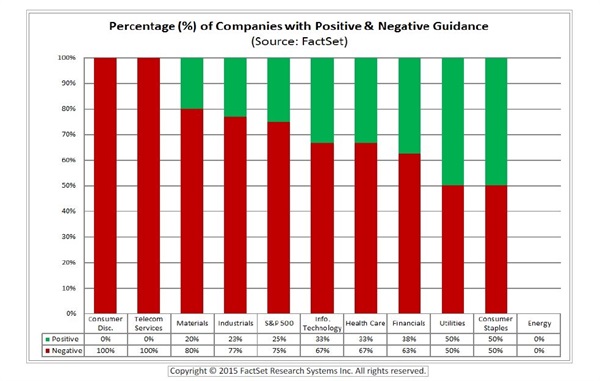 RISK HAS PAID OFF RECENTLY

Investors who want to take on the most risk have generally been rewarded the last few years.  The most aggressive investors and our most aggressive clients have fared well, especially if they owned primarily U.S. Investments last year and shifted somewhat to more international holdings this year.

Those who are more moderate investors and those who are primarily investing for a high level of income may be wishing they want to be more aggressive until they see a market drop like we saw in late August to early October.

Conservative investors have become more and more uncomfortable, however.  Yields have continued to decline.  Ben Bernanke coming out of late 2008 early 2009 did everything he could to get people away from hoarding cash and bonds and taking on more risk.  No longer does it make sense to hold these assets the way it used to, if someone needs to make greater than 4%.  The inability to get decent yields from bonds has forced some people higher into the risk spectrum with more volatile portfolios in an attempt to achieve their goals.

Those late to move funds from bonds to other types of investments received a wake up call in 2013 when they learned that bonds were no longer as steady and stable as they thought.  "Conservative" bond portfolios suffered mid year losses in the "bond panic" of 2013, but recovered over the  next few months as interests rates settled back down.

If a client wants to be relatively conservative but needs to achieve a rate higher than 4%, it is hard to do this without taking on more volatility these days.  We still advocate shifting from a slightly more aggressive posture to a slightly more conservative posture when danger signals start flashing as they did earlier this year.  "Safe investments" outside of short term holdings and insured products will fluctuate more widely in value in this current environment.   Of course if you did not catch the meaning of the quotation marks above, we know there really is no such thing as any investment without some sort of risk involved.

For this reason we have been looking for more bond substitutes for portfolios that pay good interest and dividends.  These holdings are less subject to being influenced by a "bond panic" but are somewhat susceptible to the stock market.

Below is what we wrote in September. Click here for the entire blog.

WHAT DO WE DO NOW?

There is really nothing new to tell an investor who has a good plan.  Here’s why – there is nothing to do now unless you have recently deviated from the original plan.

We are accountable to you for making sure your investment strategy is meeting the goals and objectives of your plan over the long term and keeping you focused on what you need to be doing to achieve those goals over the long term.  Which by the way, is not a month or quarter or usually even a year or two.  We spend a good bit of our time with people to help them avoid shooting themselves in the foot, helping them realize where their blind spots are and keeping them on the correct path.

So what should you do now? The same thing we would have told you to do in 2009, 2011, 2012, and even three months ago.  Have a plan, be disciplined enough to stick with it and know your need for short-term liquidity.

People who are always doing something end up doing poorly.  How do I know this?  Well there is an annual study called the Dalbar Study.  The study says that as of last year, the 30-year annualized return of the S&P 500 was 11.06% versus the average asset allocation investor who realized an annualized return over the same time of 2.47%.

Do you know why? Because of psychological factors that drive poor decisions and a lack of discipline.

Here’s a chart of the S&P 500 since March 9, 2009.  Think about how many things have happened that the press, the market, investors and advisors could have (and probably did) react to over this time and ask yourself how bad anyone could have done by having a solid plan, a good investment strategy and the discipline to stick with it and do no harm.

"Patience you must have my young padawan"  - Yoda 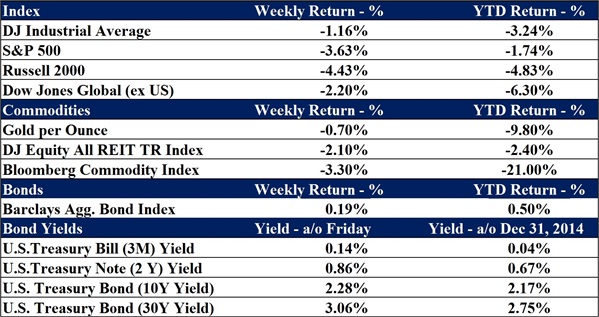 Please remember that past performance may not be indicative of future results.  Indexes are unmanaged and cannot be investedinto directly.  Index returns do not reflect fees, expenses, or sales charges. Index performance is not indicative of the performance of any investments.  Different types of investments involve varying degrees of risk, and there can be no assurance that the future performance of any specific investment, investment strategy, or product (including the investments and/or investment strategies recommended or undertaken by Franklin Wealth Management), or any non-investment related content, made reference to directly or indirectly in this blog will be profitable, equal any corresponding indicated historical performance level(s), be suitable for your portfolio or individual situation, or prove successful.
Due to various factors, including changing market conditions and/or applicable laws, the content may no longer be reflective of current opinions or positions.  The economic forcasts set forthherein may not develop as predicted and there can be no guarantee that any strategies promoted will be successful.
Moreover, you should not assume that any discussion or information contained in this blog serves as the receipt of, or as a substitute for, personalized investment advice from Franklin Wealth Management.  To the extent that a reader has any questions regarding the applicability of any specific issue discussed above to his/her individual situation, he/she is encouraged to consult with the professional advisor of his/her choosing. Franklin Wealth Management is neither a law firm nor a certified public accounting firm and no portion of the blog content should be construed as legal or accounting advice. A copy of Franklin Wealth Management’s current written disclosure statement discussing our advisory services and fees is available for review upon request.
Share |