Trump or Hillary 2016 - Is Anyone Not Frustrated? 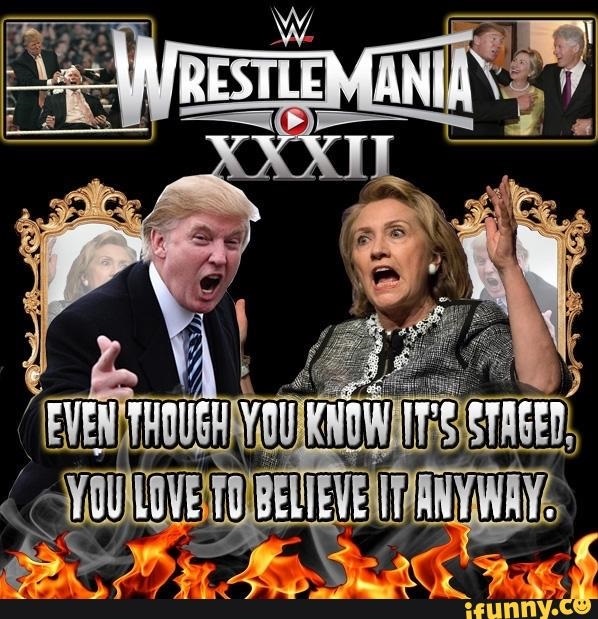 It is almost certain.  The majority of the American public are going to be disappointed with our new President come November.  According to a recent Gallop poll, over 60% of Americans view Trump negatively with only 33% of the electorate having positive feelings toward the New Yorker.  Hillary is not faring much better. Only 29% have good things to say about her. She does not inspire as much of a negative reaction in that slightly over 50% of Americans view her negatively.  It seems we are headed toward a death match to see who is going to sling the most mud and who can do a better job of beating up on the opponent.

We got a glimpse of one such death match last week at a conference in Arizona when we saw Tucker Carlson and Paul Begala duke it out onstage and give their takes on the election.

One thing the two former Crossfire commentators agreed upon is that Americans are most frustrated when voters come out en masse.  Angry voters have been attacking the voting booths and each other with each side upset about different sides of the same coin.  Wage growth has been non-existent over the last couple of decades and voters want to blame someone.  Trump is blaming immigrants and Muslims while Sanders and Hillary are blaming corporate greed.  Unfortunately, all the front runners are preaching about a zero sum game where you have to take from one party and give to another, with the spoils going to the person who can best game the system or come out ahead in an I win, you lose negotiation.

WHAT HAPPENS WHEN NO REPUBLICAN HAS ENOUGH VOTES?

Both Carlson and Begala were at a loss to name even one person who would able to broker the convention saying that even Jesus Christ would be rejected as a long haired hippy communist by the warring Republican factions.  The candidate with the most delegates will get the nomination, they told us, even if it is not a majority.  I greatly enjoyed the back and forth banter between the two in that they were able to express themselves much more openly than they are able to on air.  Of course Hillary and the Donald are the overwhelming favorites to battle it out in November.  I just hope they are able to debate on the issues rather than go on about who has an ugly face, sweats too much or has a bad spray tan. 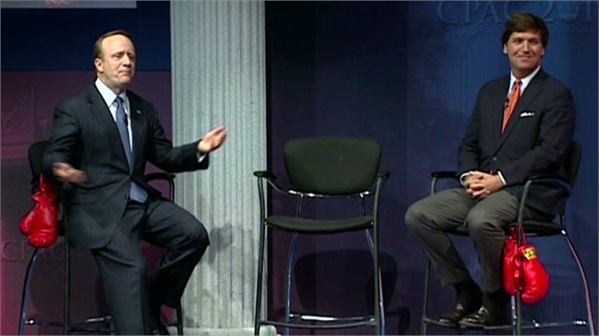 WHAT HAVE WE BEEN DEVELOPING TO WEATHER THE CURRENT ENVIRONMENT?

The party isn't over in the U.S. but it is showing signs of wearing down.  The most significant factors that we follow in determining how the markets will fare include Federal Reserve actions and the state of the economy.  The likelihood that we will enter a recession seems relatively low currently with leading economic indicators still strong and a lack of over borrowing, over spending or over confidence within our borders.  However three items are of concern with the biggest concern being "What will Janet Do?"

Janet Yellen is in a current predicament where unemployment has reached target levels and we are starting to see inflation, including wage inflation.  The Federal Reserve, feeling the need to fight inflation, has started to raise rates and has discontinued the quantitative easing programs that lifted the markets so swiftly over the last few years.  The chart below shows how the Federal Reserve asset base has ballooned and served to lift the markets since early 2009.

The question you might ask is, "Is not wage inflation a good thing?  Is that not what the voters want?"  The Fed would like to see some inflation and has targeted about a 2.5% rate, but at the same time they want to be able to unload the huge stockpile of assets they have amassed over the last few years and re-arm themselves with tools to fight another recession if one surfaces in the future. With our debt levels exceeding our gross domestic product, we want to be able to get our government balance sheet healthy again so we can survive lean times.

So in effect. the Federal Reserve has stopped providing extra spending money for the U.S. economy as the majority of the workforce is now employed, but they are not asking for it back yet. 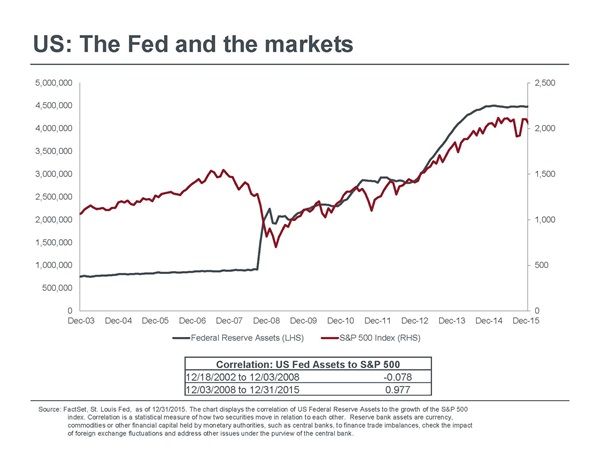 CORPORATIONS LOOK STRONGER THAN EVER BEFORE.  IS THIS A GOOD THING?

If not for the oil crash of the last 18 months and the reduction of spending that coincided with this, earnings and profit margins would be at all time highs.  Will oil continue to drop to new lows from here?  If history gives us any clues, this is definitely possible.  But it is more probable that price will revert to the long term mean at a higher level where energy dependent countries can operate without having to dip into Sovereign asset reserves.

The last few years has seen corporate America pay down debt at a strong clip.  Balance sheets are cleaner than they have been in a long time.  Interest expense is lower than it has been in several decades.  Labor costs have just started to increase but have largely remained low.  And lastly, now that lower energy costs are starting to filter into the mix, this is improving the bottom line for many companies.  Looking back over the last century, we have not had a time where profit margins are any higher in America than they were in late 2015.  Typically profit margins do not stay this high for long.  The U.S. stock market is also currently the most expensive market in the world while many other Central Banks are actively stimulating their economies. 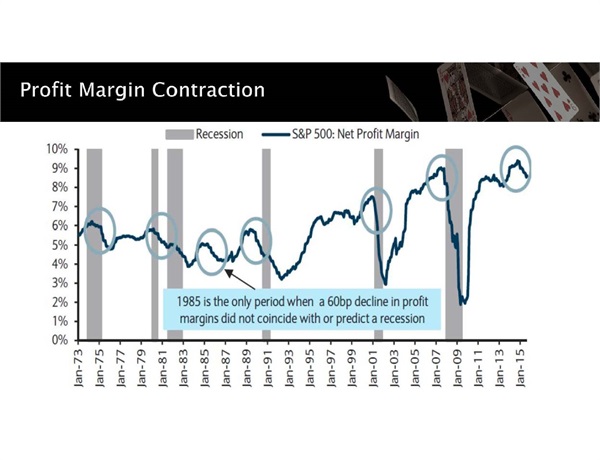 HOW DO WE SURVIVE ON NEGATIVE INTEREST RATES, INCREASED VOLATILITY AND LOWER RETURN EXPECTATIONS?

The U.S.  Markets have looked expensive compared to the rest of the world for some time now.  Today this is even more the case.  The difference is that while the U.S. economy was the strongest economy, there are now other economies starting to look stronger.  As can be seen in the chart below from Research Affiliates, a look at return expectations of stock markets around world the places the U.S. at the dead bottom for the next ten years, based upon valuation metrics. 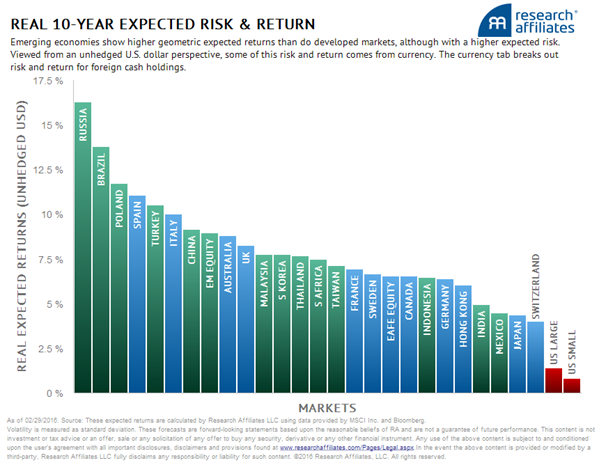 STAY DIVERSIFIED - THERE IS ALWAYS A BULL MARKET SOMEWHERE

We have maintained global and asset class diversification over the last few years as the S&P 500 continued to outpace other markets.  Our global exposure caused our portfolios to under-perform those that were solely invested in the U.S. but these things go in cycles.  We have been growing more and more concerned about a potential bubble forming in U.S. equities but are not overly concerned about this as long as the Fed is not tightening and the economy is still growing.  As can be seen below, over the last 45 years the longest period of S&P out-performance over international markets was 11 years and ended with the technology bubble bursting.  We anticipate a period much like the last where non-US markets outpace once again. 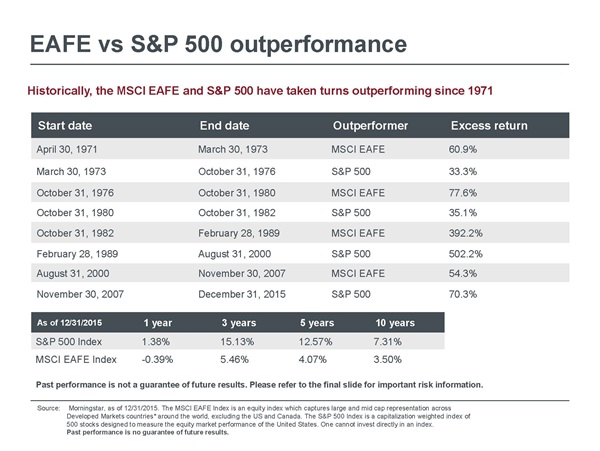 REPLACING LOW TURNOVER WITH "NO TURNOVER" IN TAXABLE ACCOUNTS

At the end of last year we noticed that many mutual funds were going to be paying relatively large capital gains for the year, even though they were under water in 2015.  We shifted out of these funds just before they were to pay into other similar funds and then shifted back after the pay date was past.  We owned many low turnover funds that were historically tax efficient but they were paying large taxable distributions nonetheless.  For this reason we are embracing index ETFs to a greater degree for clients with taxable, non-retirement accounts and feel we can offer more diversification as well with passive as well as active strategies.

Investors seeking more certainty can typically find it by laddering a portfolio of bonds and other fixed income vehicles.  In a stable or rising interest rate environment this works to provide more income over time as the lower yielding bonds mature and are replaced with new bonds at the end of the ladder that pay a higher interest rate.

For more on this strategy - please follow this link

Fixed income from treasuries is approaching a seventy year low.  Many higher yielding bonds defaulted last year.  In order to get the income they need for their golden years, many retirees are forced to take more risk and deal with the increased volatility.

With U.S. Markets expected to return less than three percent (based upon the chart above), a four to seven percent lifetime income stream starts to look more appealing for those living off their accumulated assets.

CHANGES IN JANUARY AND FEBRUARY

Going into January our models were positioned to take advantage of a more robust market.  This did not come to pass and we quickly took a cautious stance as the indices dropped below the lows of December.  The economy continued to show very few signs of weakness, valuations contracted, panic reached a crescendo and we started seeing large CEO purchases in early February.  As the markets retested the lows of January and rallied to new short term highs forming the last part of the W formation, we re-engaged toward the end of last month. 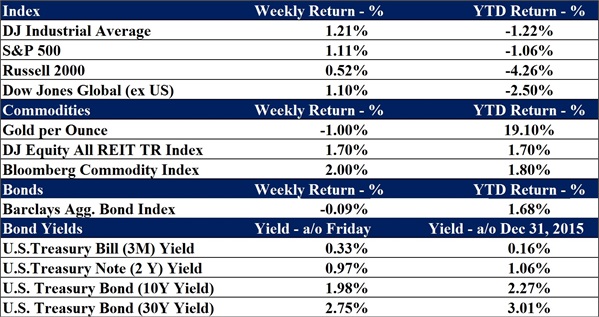