Which Party is Better for the Markets? 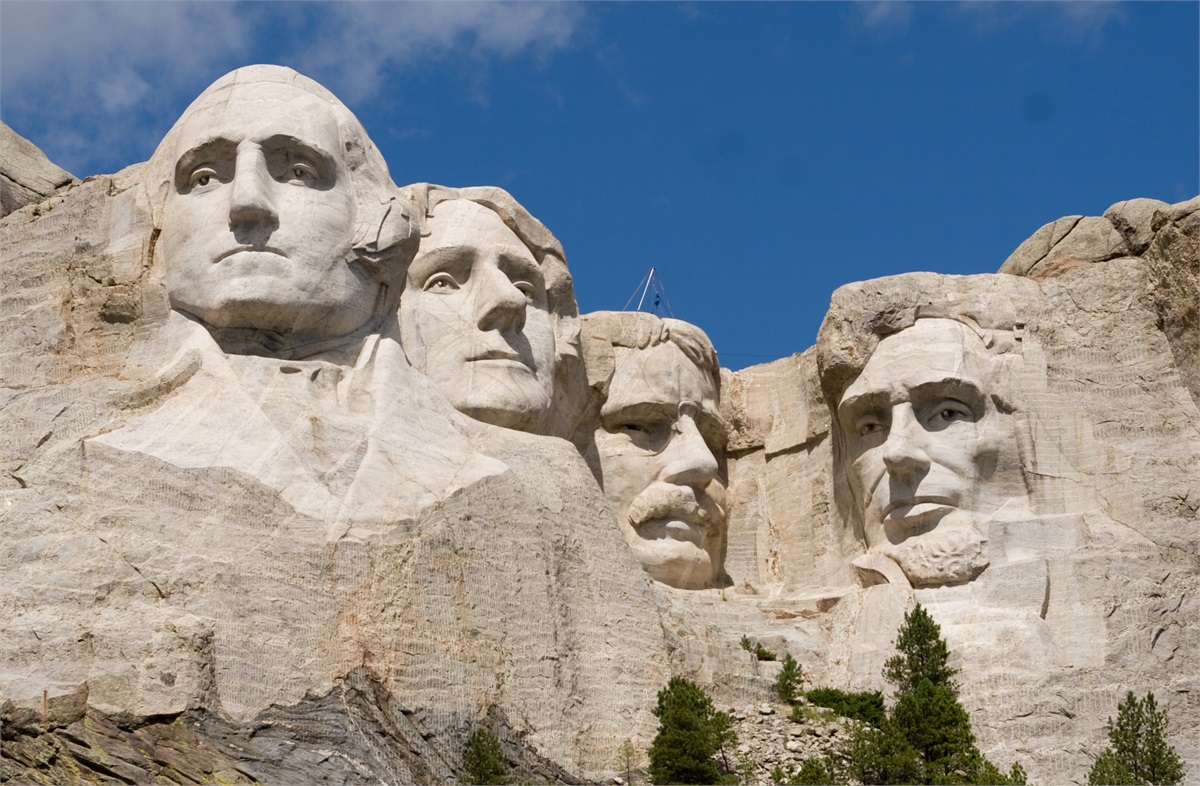 In general the markets like checks and balances in government without too much uncertainty.   It's clear that the electorate does not like the partisan politics and lack of cooperation that has been the hallmark of the last few years.  Hopefully we will see this change regardless of the person who wins the White House in November.  The races are shaping up so that we know who is going to be representing each party and now hopefully we can see more substance when it comes to issues and how each candidate chooses to resolve the current dilemmas facing our nation today. 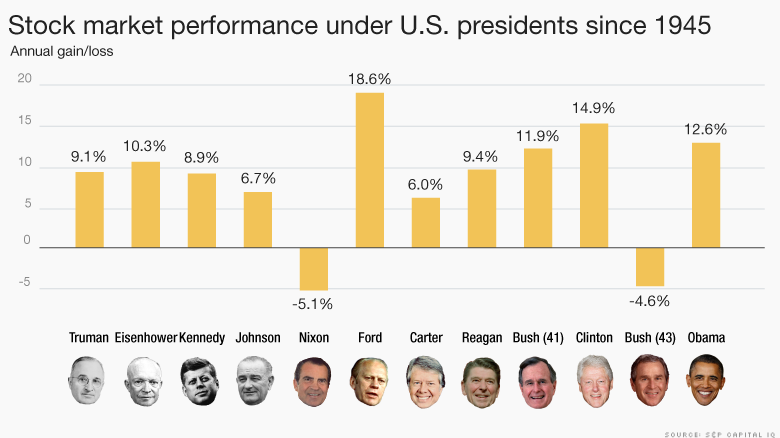 SO FAR SO GOOD

The recovery from the lows of February have been impressive.  We've seen almost all the indices approach the highs last seen in November.  Whereas we have not seen many new yearly or all time highs out of these indices, things are definitely taking a turn for the better.

Earnings are better than expected for this past quarter.  It helps when analysts are not expecting much.  So far, approximately three quarters of all companies reporting this quarter have exceeded estimates.  Energy companies are reporting the largest declines versus last year, but as a whole they are doing better than most have expected as well.  Three sectors are expected to show growth: Discretionary, Telecom and Healthcare.  If we see growth out of any of the other sectors, this will be a positive surprise and should be rewarded by the market.  The key thing to remember is that low expectations usually translates to positive surprises which usually translates to additional upside for stock valuations. 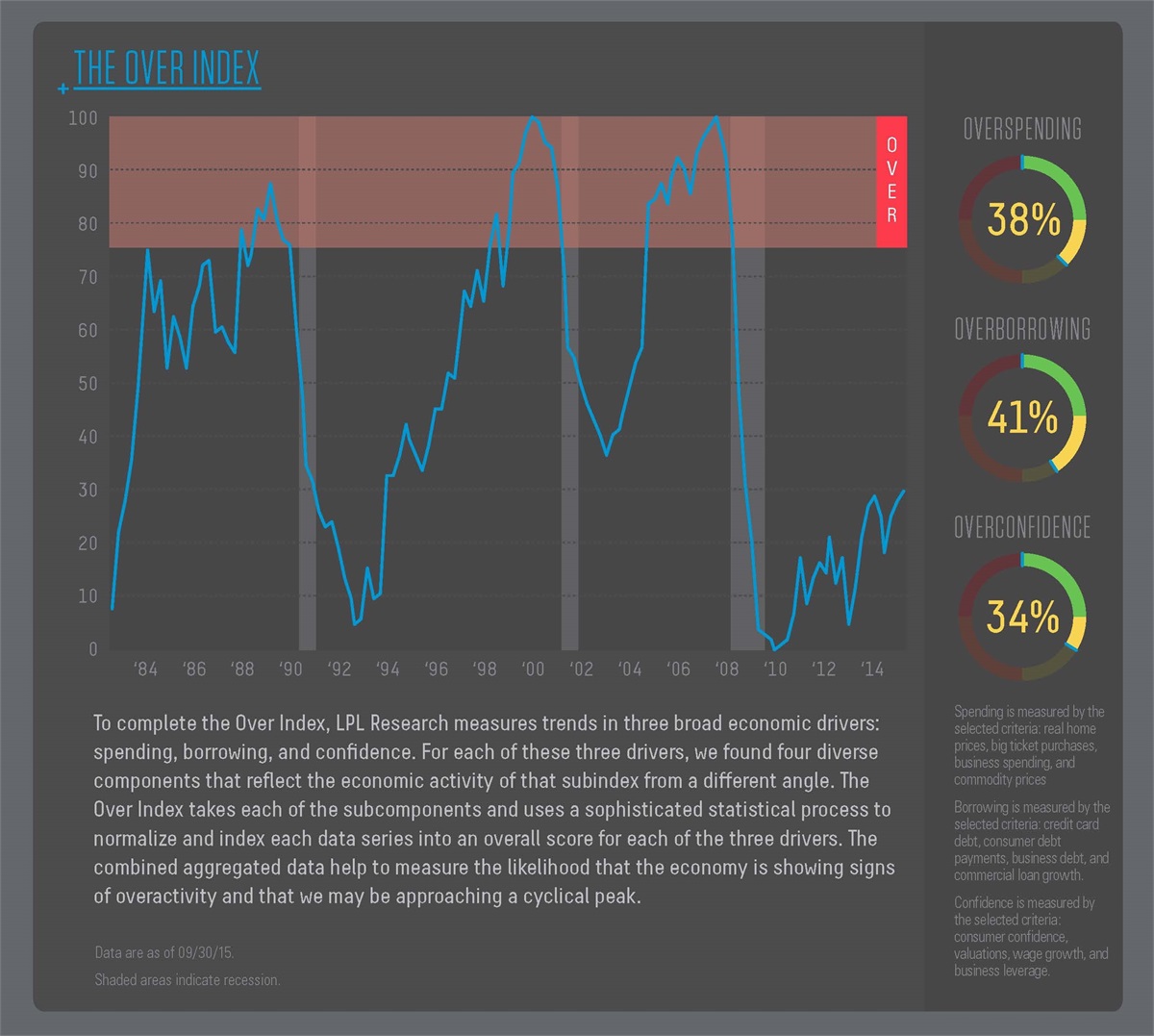 THE OVER / UNDER AND THE MARKETS

Over the past thirty years, there have been three broad economic drivers which tend to go to extremes and point us to bubbles in the economy and the markets.  In looking at these bubbles since the early 1980s we can see that they were caused by being "overly" committed in any of these three broad categories:  Spending, Confidence, and Borrowing.    The chart below shows past periods when the "Over Index" was in the danger zone and where it stands now.  As you can see, from late 2006 to the end of 2008, over-borrowing was prevalent and led us into the danger zone.  Late 1998 to late 2000 was typified by over-confidence.  In the early 1990s we saw over-spending.  If any one of these goes to an extreme, we could wind up in bubble territory again, but we are not seeing anything close to a danger reading from any of these currently.

If we want to look at a chart showing where we currently are in the economic cycle compared to other past expansions by measuring various factors, this is how we currently stand: 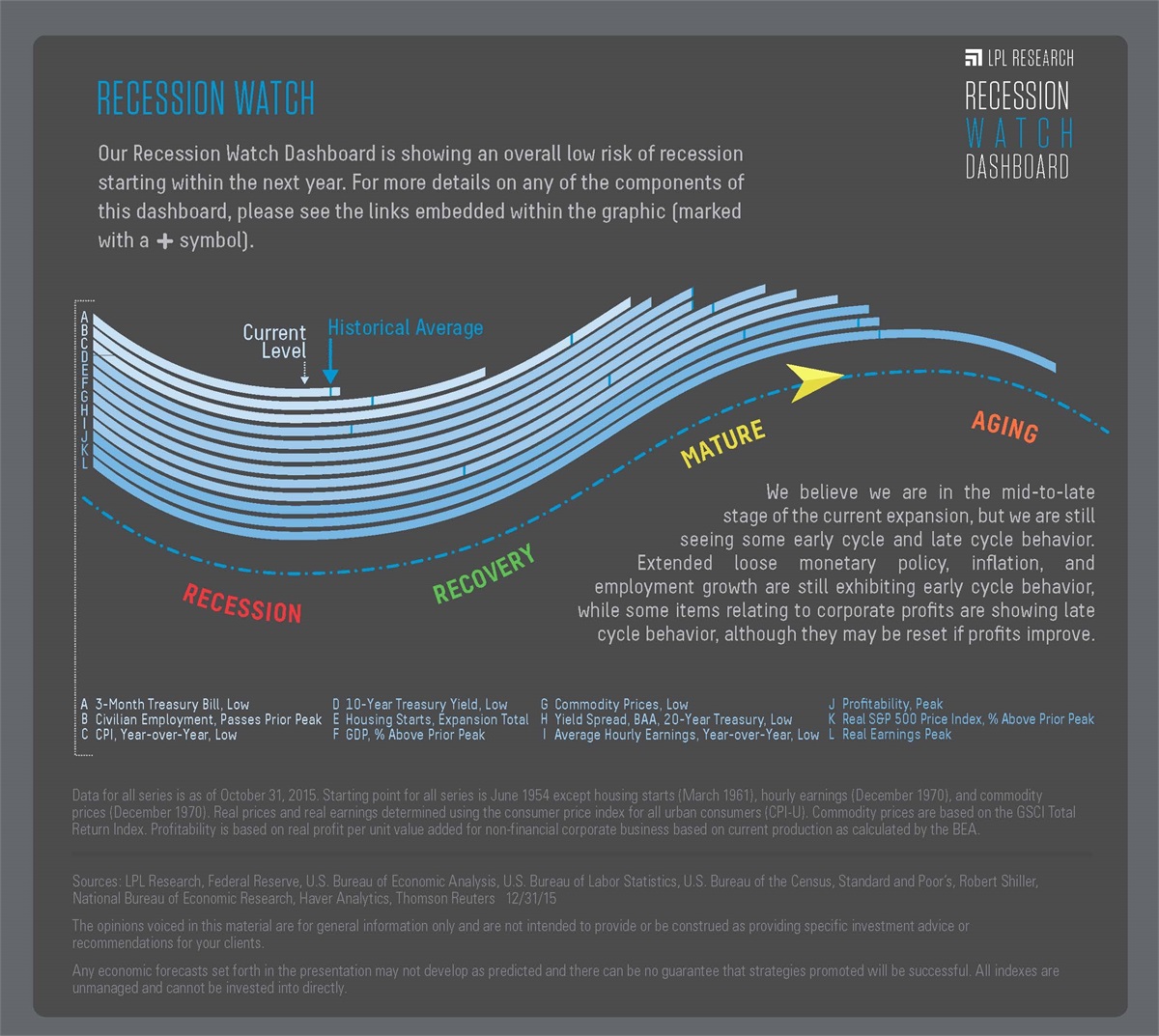 Lastly, we might want to look at forecasters in the chart below combined with a couple others that we follow.  The yield curve and leading economic indicators still look strong.  One of the better early warning indicators preceding a market pullback and economic slide comes about when the treasury yield curve becomes inverted.  This happens when long term rates pay less interest than short term rates.  Over the last few decades we have never seen this happen when it was not followed by a market pullback and subsequent recession.  It is hard to find a significant bear market that was not preceded by an inverted yield curve.  We have yet to see the yield curve become inverted over the last few years, either.

Currently valuations and the anticipated health of the manufacturing sector (as measured by PMI) give us some concerns.  The markets and the economy look like a healthy older man, if we were to look solely at these two items. 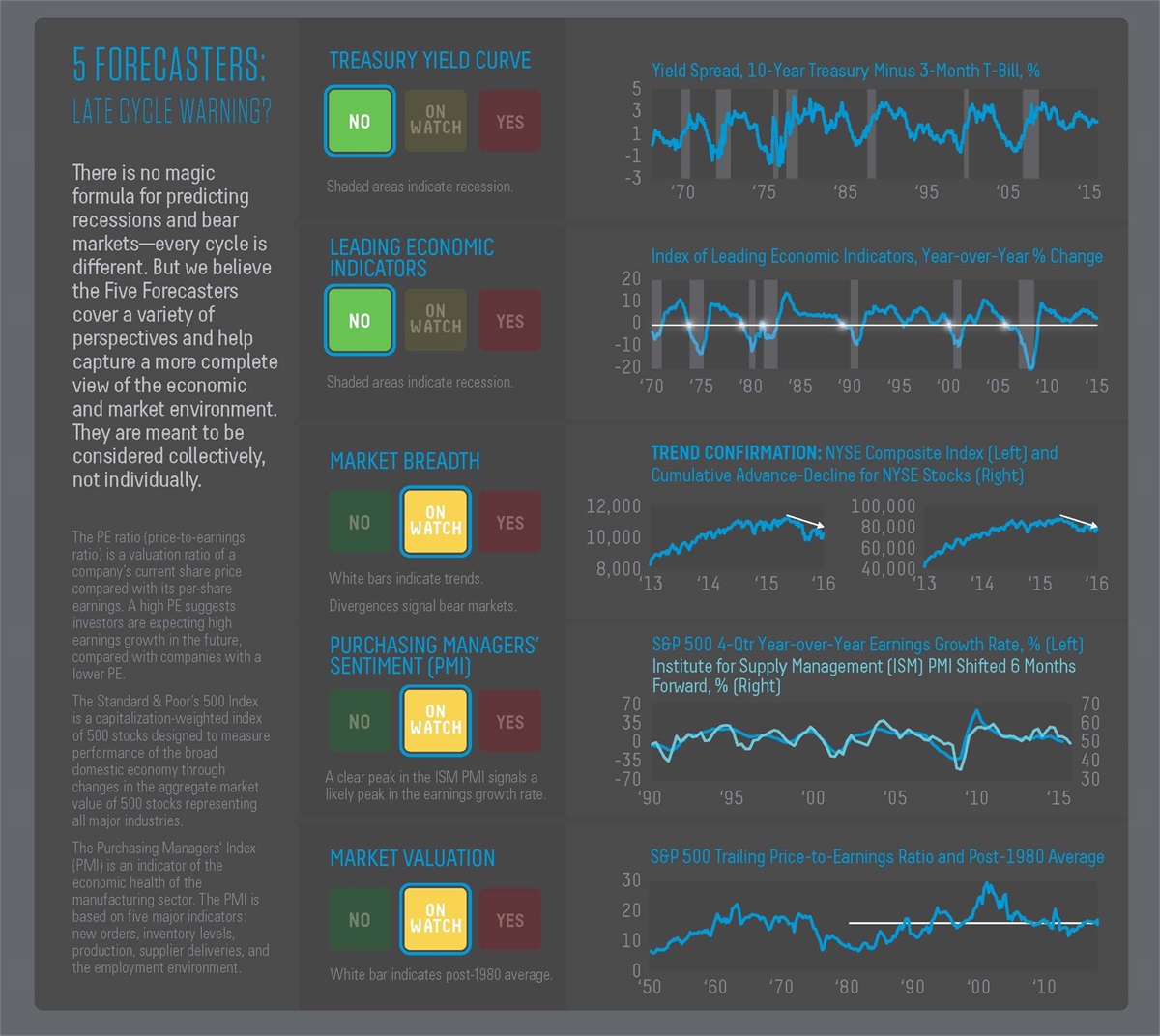 Investor Sentiment and CEO purchases are two things not included on the chart above which we follow closely.  When most investors are buying or selling and are overly pessimistic or optimistic, we typically want to be on the opposite side of the coin.  The crowd tends to be wrong at the extremes and we like to take advantage of the manic depressive nature of “Mr. Market.”  We saw extreme pessimism in late January to early February this year, combined with significant buying from CEOs who were purchasing their own company stock.  We wrote about this in our post "Is it Time to Go to Cash?".  These two items working in tandem in mid-February, told us that it was time to be more heavily involved in equities.

The last item which bears watching is market breadth.  The charts we have been discussing were last published in March and breadth has improved since then.  The following update was provided last week by Dan Sullivan, writer of the Chartist Newsletter.  Here is what he had to say about the improvement in market breadth:

The Chartist 90% Rule, which was one of our proprietary indicators revealed for the first time in the June 5th, 1980 edition of The Chartist, flashed a rare buy signal on April 19th. Only ten previous buy signals have been generated since 1970 with the last one taking place on October 13th, 2010.

Thus far, all of the previous Chartist 90% buy signals have proven to be successful.  Here’s how it works. Whenever 90% or more of the stocks on the S&P 500 manage to rise above their respective 50-day moving averages, it is a strong indication that the market has managed to generate enough thrust to continue rising for several more months. Note: There have been ten previous buy signals since 1970, and they were all generated during periods when the market was overbought and appeared to be vulnerable, which was certainly the case at the time of the recent signal. 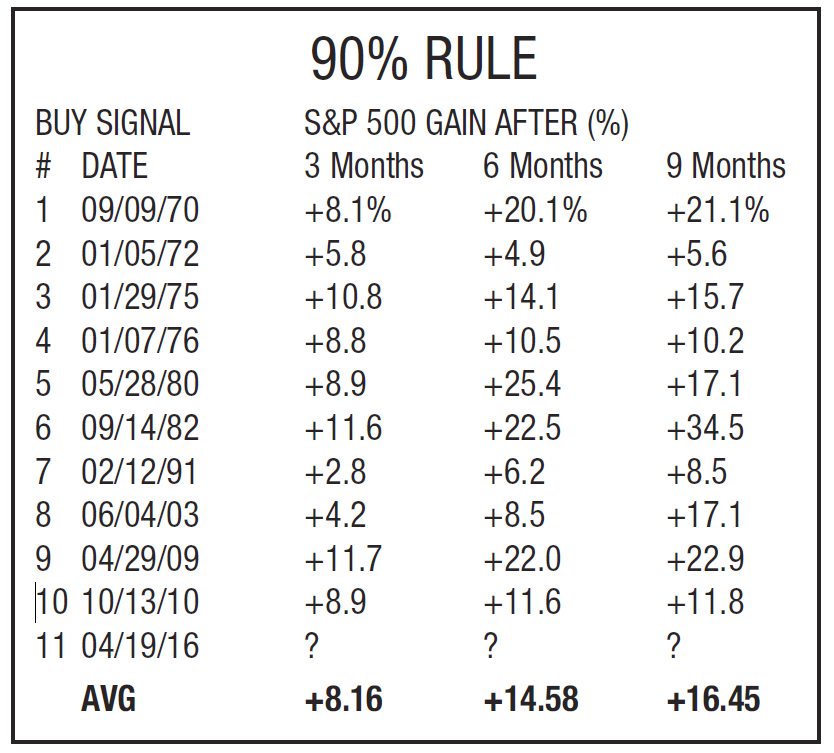 A compatriot of mine at Monument Wealth Management who writes the "Off the Wall" blog, recently posted some insightful charts with commentary last week.   David's sarcastic wit is mildly amusing and he makes a few good points.  I have included a snapshot of his comments below: 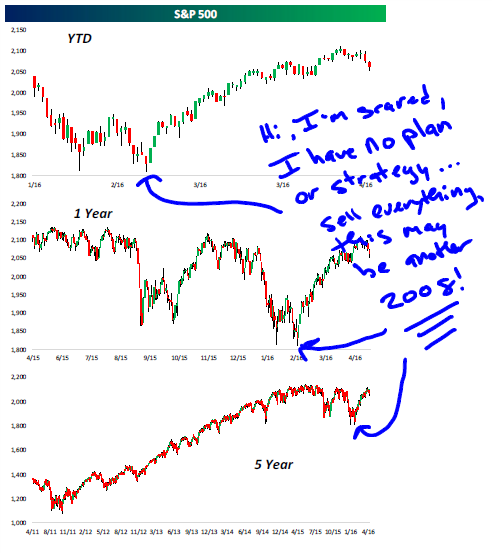 I get it, no one likes to have to ask, “Why isn’t my portfolio making money?” and I certainly hate having to answer it with, “Well, a major factor is that the markets are flat.”

The hardest part of doing what we do is keeping people from making big mistakes.  So while flat sucks, having to dig out of a hole made by a mistake is even worse– and believe me when I tell you the investing landscape is littered with people having made this mistake.  The thing I’ll hang our hat on is that throughout (and after) those dips, we maintained that we did not see anything signaling a recession and that our feeling was that they were panicked sell-offs.

As the markets digested the fear and the recession data never materialized, the market recovered.  THIS IS WHY UNLESS YOU NEED CASH, YOU SHOULDN’T DO ANYTHING DURING THESE SELL-OFFS.

If you made this mistake, it’s okay.  It can be fixed and there is something to be learned from it"

REPLACING LOW TURNOVER WITH "NO TURNOVER" IN TAXABLE ACCOUNTS

At the end of last year we noticed that many mutual funds were going to be paying relatively large capital gains even though they were under water in 2015.  We shifted out of these funds just before they were to pay into other similar funds and then shifted back after the pay date passed.  We owned many low turnover funds that were historically tax efficient but they were paying large taxable distributions nonetheless.  For this reason, we are embracing index ETFs to a greater degree for clients with taxable, non-retirement accounts. We feel we can offer more diversification utilizing both passive and active strategies.

Investors seeking more certainty can typically find it by laddering a portfolio of bonds and other fixed income vehicles.  In a stable or rising interest rate environment this works to provide more income over time as the lower yielding bonds mature and are replaced with new bonds at the end of the ladder that pay a higher interest rate.

For more on this strategy - please follow this link

Fixed income from treasuries is approaching a seventy year low.  We also saw an uptick in defaults from high yield bonds in 2015, primarily as a result of the fallout in the energy sector.  In order to get the income needed for their golden years, many retirees are forced to take more risk and deal with the increased volatility.

With U.S. Markets expected to return less than before, a four to seven percent lifetime income stream starts to look more appealing for those living off their accumulated assets.

"The only thing we have to Fear is Fear Itself" 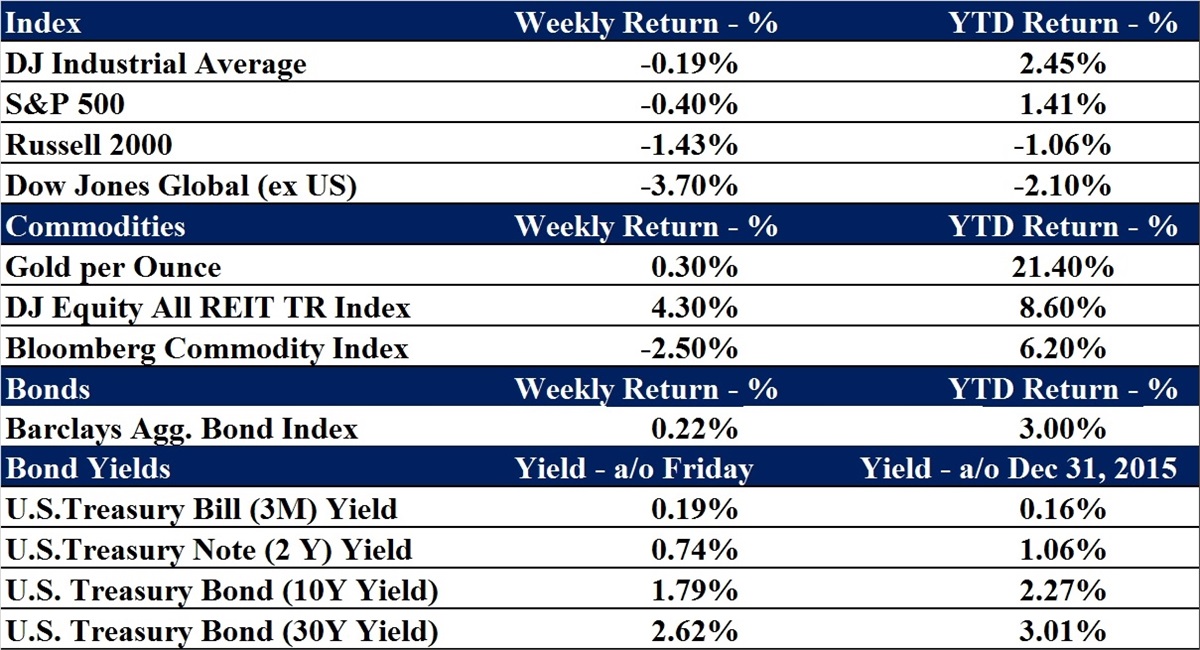