Later this week Jennifer and I will be flying south for the winter to enjoy some sun and scuba diving to celebrate our anniversary. We’ve been to Belize once before but were not able to dive the Blue Hole on our last visit. This time we are staying at a resort that is the closest to the dive site and will hopefully be able to check this off our bucket list. Diving a month later than originally planned, we look to benefit from more sun and hopefully less rain than we would have experienced in January. Celebrating Valentine’s Day on the beach will be much more fun than being separated and quarantined from each other on our anniversary.

Last week during our 2022 Forecast Event we covered what to expect as we move through the current market cycle, profiting from inflation, and how to position for the eventual crash that takes us down from historically high multiples.

Most people realize that the U.S. Markets are more overvalued than most periods in the past with the possible exception of the late 1920s and 1999. But fiscal and monetary stimulus from the U.S. government and the Federal Reserve has continued to fuel the fire to expand the bubble that is the U.S stock market. With interest rates at historic lows, if we consider that equities look expensive, bonds look even more expensive, and this is what has pushed so many investors into the equity markets when they may have previously considered themselves “conservative” investors. 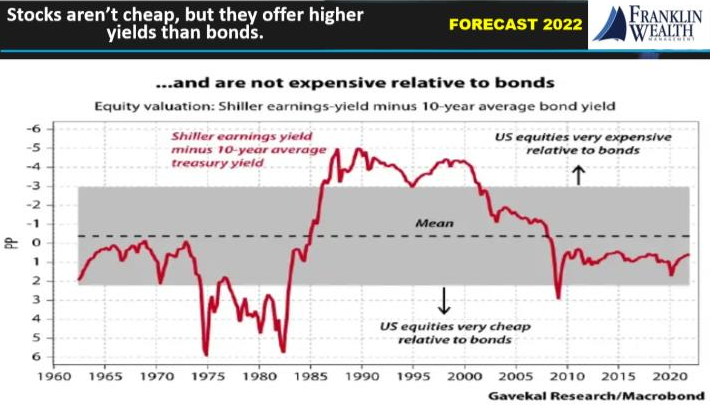 As interest rates start to increase from here, many are concerned that these “conservative” investors will be looking to draw down the risk in their portfolios by pulling funds away from stocks. Typically, when interest rates are rising as they are now, equity markets tend to perform well, however. As can be seen below, over the last 60 years, there have only been three periods when interest rates (as defined by the 10-year treasury rates) were increasing when the U.S. equity markets lost value. When we consider that interest rates are typically increasing during strong economic periods, these strong periods lead to higher valuations for the markets. 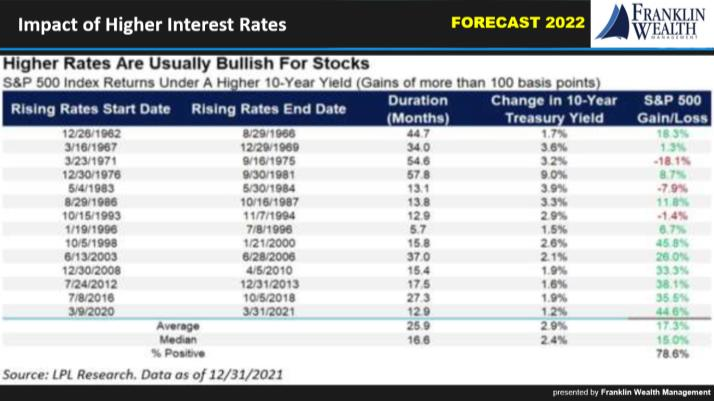 It’s when the economy starts to falter and we start worrying about averting recession that the Federal Reserve typically starts to reduce the Federal Funds Rate and try to stimulate the economy. Sometimes this leads to a soft landing and sometimes we head into a bear market and a recession.

We like to refer to these recessionary periods with markets down 20% or more as “Winter” for the markets. This “Winter” period is followed by “Spring” where the market’s bottom and the Federal Reserve continue to stimulate and lower interest rates. This “Spring” period typically continues with little to no change in the Federal Funds rate for a period of time until they realize that the economy and inflation are running hot. That is the time the Federal Reserve starts tightening and starts raising rates. After the first-rate hike, we have officially entered “Summer” for the markets.

Since the early 1980s, we have never entered into a “Winter” recessionary period that was not preceded by a “Summer” period. What we want to underscore is that when we enter the “Summer” period, we likely still have a good runway ahead of us before we want to start preparing for the eventual recession. The treasury yield almost always gives us a strong warning for an upcoming recession when it becomes inverted, and the 10-year yield drops to where it is less than the 2-year yield. 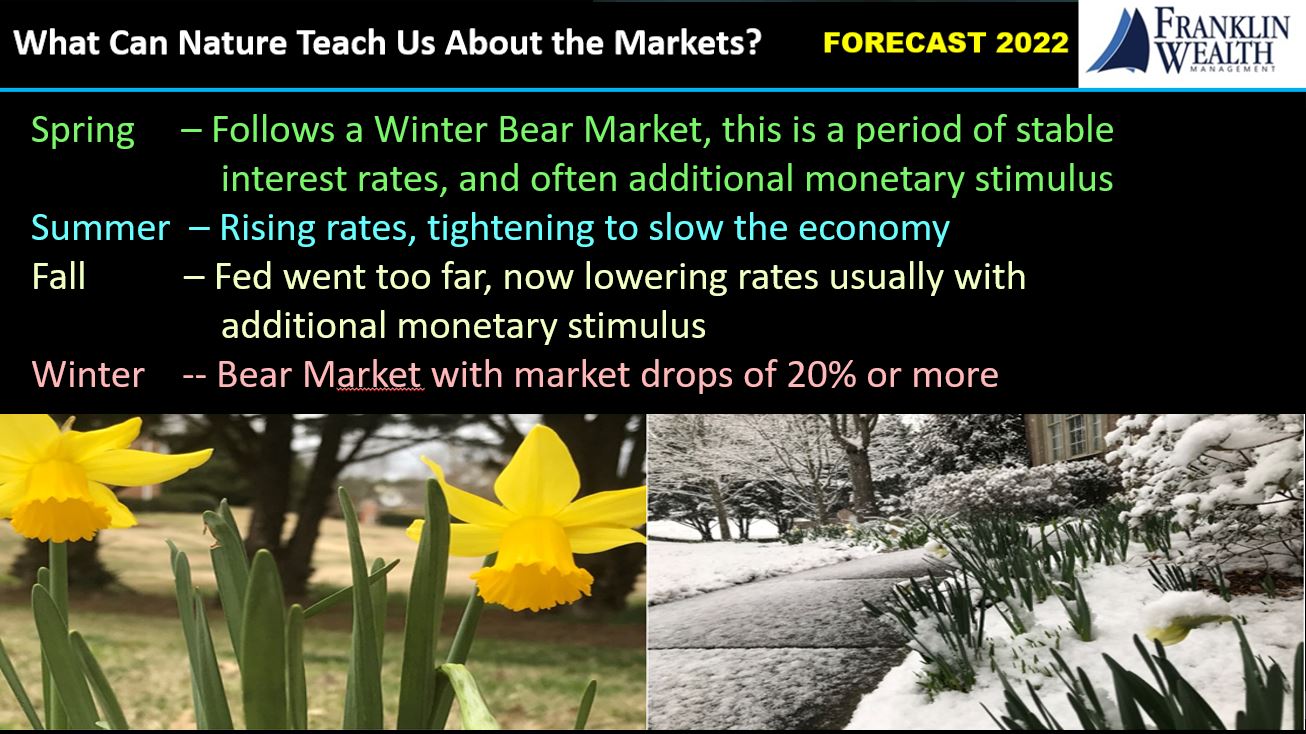 The last time we saw a period of stable interest rates shift to a period of rising interest rates (Spring to Summer) was December of 2015. Janet Yellen was our Federal Reserve Chairman at the time and prior to the first-rate increase, we saw a drop of 17.6% in the Nasdaq 100. Value holdings, especially energy companies fared worse during this period. The market looked like it had recovered in November 2015 but started its fall again just prior to the rate hike on December 17th of that year. From the high in November to the low in February 2016, the Nasdaq 100 and S&P 500 had dropped 18.1% and 13.3% respectively.

Those who sold after this first-rate hike close to the February 2016 bottom missed the 97.7% run-up in the Nasdaq to the October 2018 high. This “Summer” period ended when the Fed. stopped raising rates in December 2018. After we entered the “Fall” period with the Jerome Powell working to stimulate the economy and lowering rates, the market eventually topped in early 2020 prior to the pandemic recession.

From studying these periods, we learn that “Summer” periods tend to be more volatile than “Spring” periods as investors increasingly worry about Federal Reserve action. But what we want to underscore is that those who are scared out of the markets entering “Summer” are likely to miss out on more gains than they stand to lose on balance. 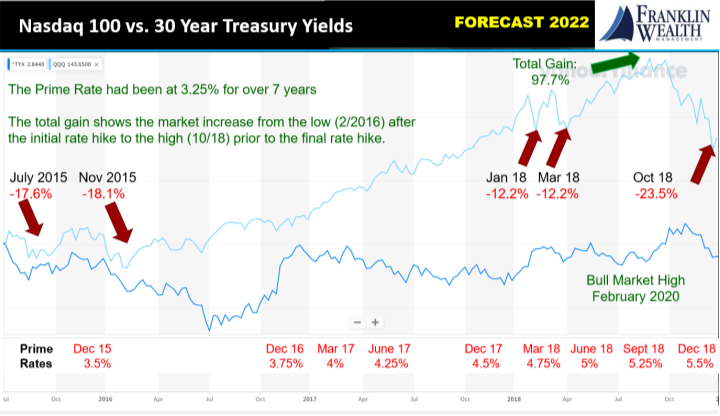 The markets feel more like 1999 than the more recent “Summer” periods. Many are calling the current markets a “bubble in all assets” that surpasses that of all others in our lifetimes. The 1999 dot.com bubble seemed slightly more frothy than the current market, but the difference is negligible. In 1999 the markets continued to march upwards every time we saw a pullback with investors “buying the dip”. There was a brief pullback prior to the first-rate increase in July of 1999 and another brief pullback after. October saw another new high followed by another 11.8% pullback before the Y2K mania propelled the Nasdaq to the January high. After the Nasdaq 100 briefly dipped 17.1%, it rocketed to its eventual high in mid-March. This was a brief “Summer” period of only 7 months, but those who missed this period after the first rate hike also missed a gain of over 125%.

This period was similar to the current period not just because of the rampant speculation and high valuations. Volatility remained high during most of this period and 10-year treasury rates continued to increase throughout the “Melt Up”. This leads us to believe that 2022 may lead to a similar “Melt Up”, likely ending sometime in 2023 as the Fed. continues to raise rates. 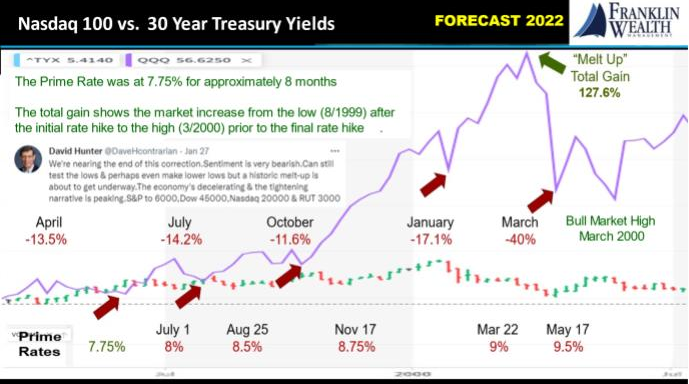 This look into the past will help us better prepare for the months ahead. We currently expect the highs for this market cycle to hit sometime in 2023. We also expect to see continued volatility and a return to speculative excess. However, earning an extra percent or two on our investments tends to make less of an impact than actions that we take on the planning side to minimize long-term taxes, structure asset location, optimize distribution strategies, and the like. We encourage those who have not engaged in comprehensive planning to embrace this and fully experience being financially fit. 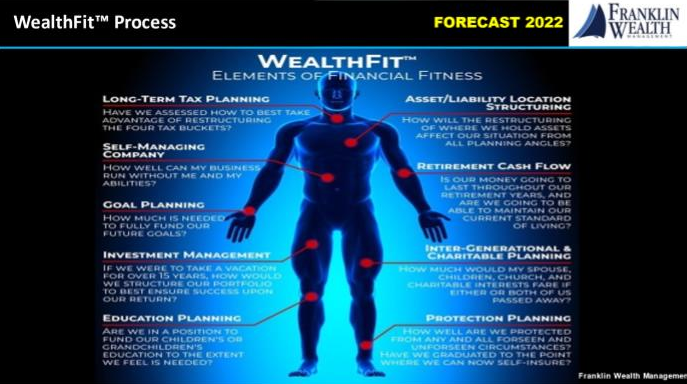 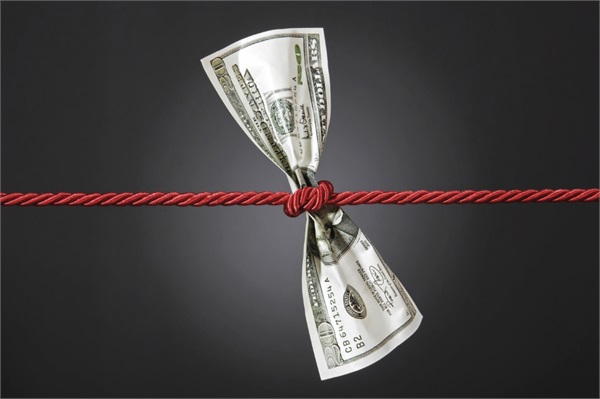 Financially Independent Children in the Age of Entitlement 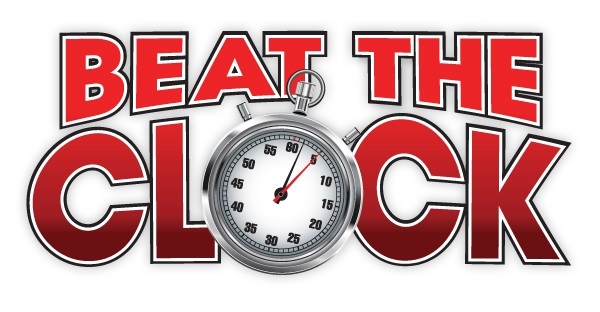