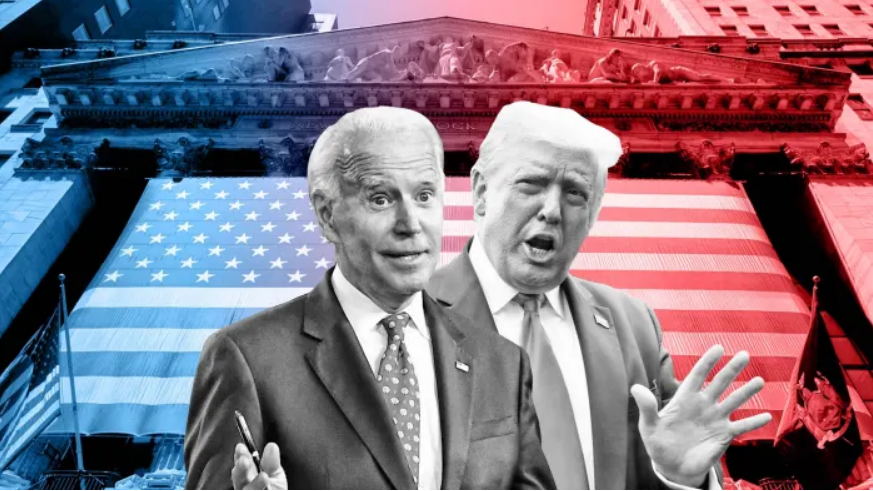 For more commentary on the 2020 Election and stock market impacts, please visit and subscribe to our channel on YouTube by clicking here.

With all the concerns about the coronavirus pandemic and social unrest, many have been unsure whether we would have a football season this year.  Until a month ago the NFL season was up in the air, but we had a chance to watch the Super Bowl Champion Kansas City Chiefs play the Texans on Thursday night. Carter Payne in our office witnessed a win from his beloved Clemson Tigers this weekend.  And although the games are still a couple of weeks out, the Tennessee Volunteers started the pre-season ranked in the Associate Press poll and have now moved up into the top 15 with several teams not playing this year.  I cannot remember when the Volunteers were last ranked over the past decade, so I am excited. 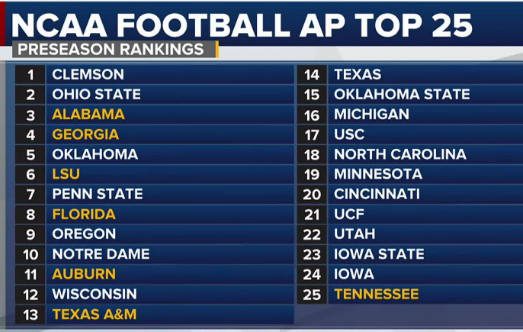 Although I was looking forward to watching the games this weekend, I realized that since we had switched over to fiber optic streaming and ditched our cable boxes, I had yet to watch any live television in the downstairs media room since the beginning of Summer.   I have been reading the news, trying to insulate myself from the manic-depressive nature of live media and “Mr. Market” but I’m now “back to normal” as far as weekend fall sports are concerned.

How does this relate to the Election and the Markets?  The NFL and various athletic conferences, while being cautious, taking steps to protect players and fans, are finding ways to overcome the pandemic and not let fear or circumstances cancel the upcoming season.  Economies around the world outside the U.S. are recovering in large part to unprecedented and decisive action on the part of central banks and global government fiscal stimulus.  The chart below shows the extent of this stimulus at work to pump up economies around the globe.  Looking to the future, the U.S. should see recovery as well if our government officials work together to solve the most urgent pressing issues. 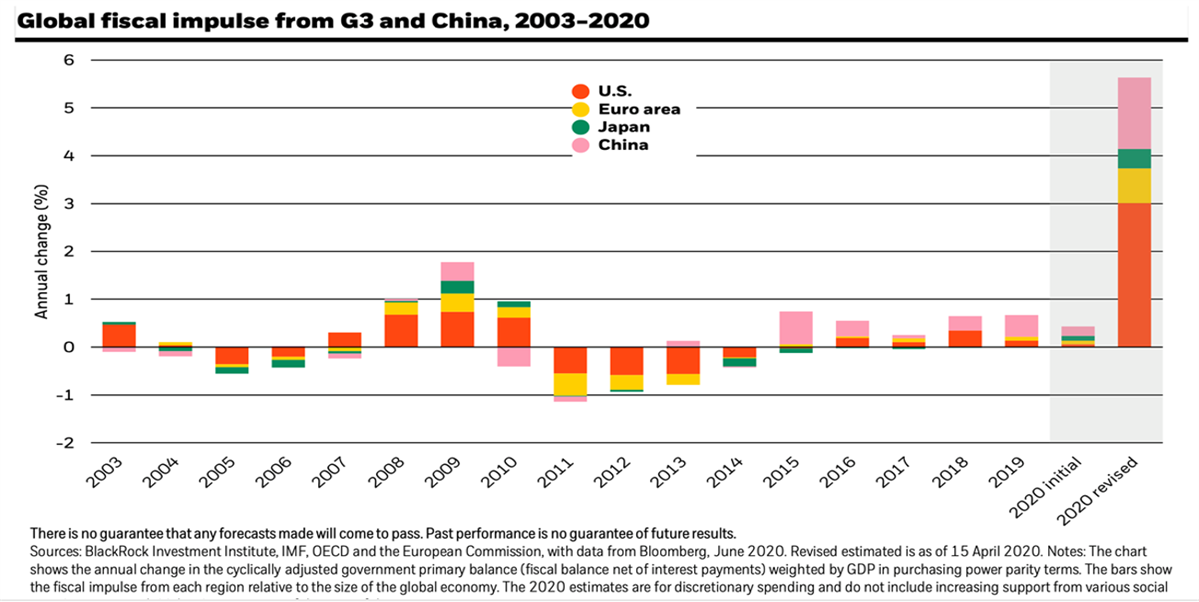 What Do We Make of the Recent Increased Volatility?

The last couple of weeks has seen increased volatility and profit taking in momentum, names that have done so well since the market bottomed in March.  Is this because previously starving sports fans are selling Tesla, Shopify and Zoom to place bets on their favorite NFL real and fantasy teams?  Is the market giving back gains because additional fiscal and monetary stimulus has been put on hold with partisan politicians posturing?  Is the market just acting like a rubber band that stretched too far toward fear in March and has now stretched too far in the opposite direction with speculative excesses in the most popular names?

All the narratives carry a kernel of truth but the most important item to watch going forward is action from Congress, the White House and the Federal Reserve and how they will continue to support the economy or walk back the stimulative measures of the last few months and years.

While we continue to stress that markets continue to move forward regardless of who is in the White House, we also want to stress that we are very concerned about a political sweep in either direction.  Most political analysts believe that the chances of a sweep toward Trump and the right with the Republicans taking the House of Representatives is increasingly unlikely.  A sweep toward the left is much more likely with the Democrats taking the Senate and the White House.  We continue to contend that too much power in the hands of one party allows for populist revolutions like those prevalent prior to World War II.  For more on the perils of populism feel free to read our recent article Politics and Populism in 2020.

What Election Scenarios Are Most Likely and What Should We Expect?

Recently Eric Winograd of Alliance Bernstein wrote an insightful analysis of how the election is likely to impact the U.S. economy and what to expect based upon which party takes power in the Senate and the White House come November.

“The field is set for the 2020 US presidential election, and markets are turning their focus to November’s contest. Historically, political transitions haven’t had much impact on the economy and markets. But with the political spectrum and breadth of potential policies widening, that will likely change. That’s all the more true because of the circumstances in which we find ourselves. The ongoing COVID-19 crisis and resulting policy responses will likely make this election result more meaningful than normal.

Of course, we can’t predict the electoral result for the presidency or Congress, and even the market’s reaction is unclear. Four years ago, conventional wisdom said a Trump win would create policy uncertainty and be bad for equity markets - today, markets are at record highs. However, given the stakes of this election, investors would be well-advised to track a few key themes. In our view, the most important policy factor that will drive financial markets over the next several months is fiscal stimulus.

With the US economy still reeling from COVID-19, future growth rests heavily on government spending to replace lost household income. Financial markets are even more reliant: the equity market seems far above levels that the economic environment alone would justify. So, markets will be watching to see if the result makes stimulus more or less likely. The second most important policy factor for financial markets will likely be tax policy. Equity markets have received a shot in the arm from the tax cuts passed in 2017, which bolstered corporate profits. The possible reversal of these corporate tax cuts will also be a meaningful influence on the market. To assess the likely impact of the election on these issues, we’ve created a grid with the four potential outcomes (assuming Democrats keep control of the House of Representatives in any case). These include a red wave and a blue wave, in which one party controls both the Senate and presidency. 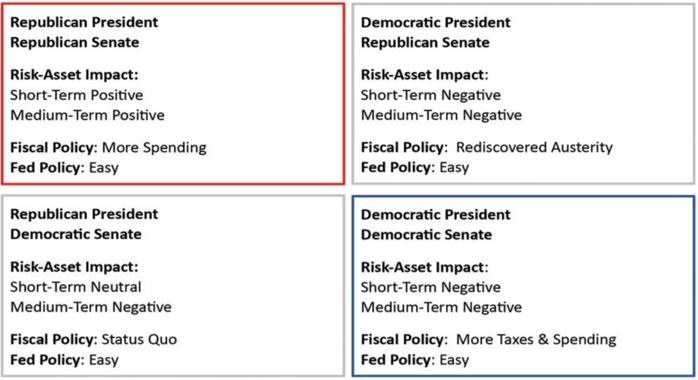 A red wave (upper left), with Republicans controlling the Senate and White House, would probably represent more of the status quo, with current policies staying in place. The Trump administration cut taxes and boosted spending when the economy was strong, so there’s little reason to expect a change in a weak economy. The president’s executive orders to push funds into the US economy despite resistance from Senate Republicans signals his policy priorities, and that resistance would likely fade in the wake of a successful electoral campaign. With more spending and possibly more tax cuts on tap, the red wave seems to be the most favorable electoral outcome for financial markets.

In the blue wave (lower right), Democrats would win the presidency and Senate (therefore controlling both houses of Congress). This outcome would be similar in some ways with the red wave in terms of fiscal policy, but corporate tax cuts would most likely be reversed. So, it seems reasonable to expect financial markets to struggle in the near-term aftermath of a blue wave. But after a blue wave, fiscal policy is most likely to be expansive - House Democrats have already passed a $3.5 trillion stimulus bill that is hung up in the Senate. And infrastructure spending is most likely to increase after a Democratic sweep. So, while tax policy could be a near-term market headwind, spending plans would probably benefit markets over the medium term. The other two scenarios would be variations of gridlock. A Republican president and Democratic Senate (lower left) would be the more benign version, looking in many ways like the status quo in which the Senate resists White House priorities. Over time, we expect a spending agreement in this scenario, but after a slow and painful process. A Democratic president and Republican Senate (upper right) could be more problematic for markets. The Senate is already reluctant to roll out more stimulus - and would very likely prevent more stimulus spending altogether if the White House changes hands. Because the US economy and financial markets rely a lot on that spending, the risks of a double-dip recession would be very high, and financial markets very likely would suffer. All of these scenarios, of course, depend on the election result being resolved on or fairly soon after election day. If the result isn’t clear-cut, all bets are off. Hopefully, that won’t be the case, and the US receives a clear election outcome that allows markets to process the outcome and move forward.”

For those who are concerned about the upcoming election and the state of the markets, there is nothing wrong with reducing risk exposure to a level closer to your Family Index Number.  Of course, if you are already at or below this Family Index Number, other action is necessary and requires a more in-depth conversation. 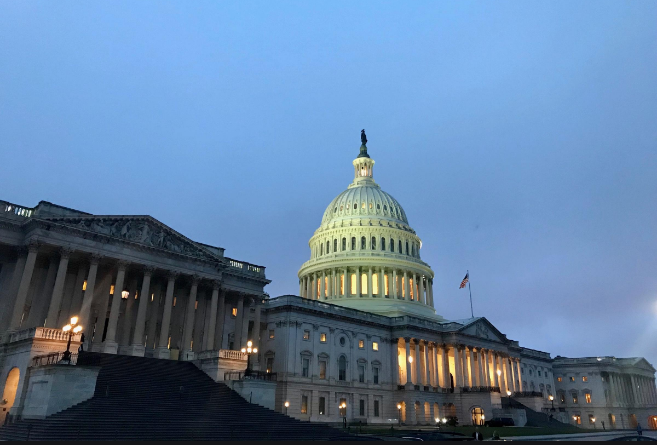 Please remember that past performance may not be indicative of future results.  Indexes are un-managed and cannot be invested into directly.  Index returns do not reflect fees, expenses, or sales charges. Index performance is not indicative of the performance of any investments.  Different types of investments involve varying degrees of risk, and there can be no assurance that the future performance of any specific investment, investment strategy, or product (including the investments and/or investment strategies recommended or undertaken by Franklin Wealth Management), or any non-investment related content, made reference to directly or indirectly in this blog will be profitable, equal any corresponding indicated historical performance level(s), be suitable for your portfolio or individual situation, or prove successful.  Due to various factors, including changing market conditions and/or applicable laws, the content may no longer be reflective of current opinions or positions.  Moreover, you should not assume that any discussion or information contained in this blog serves as the receipt of, or as a substitute for, personalized investment advice from Franklin Wealth Management.  To the extent that a reader has any questions regarding the applicability of any specific issue discussed above to his/her individual situation, he/she is encouraged to consult with the professional advisor of his/her choosing. Franklin Wealth Management is neither a law firm nor a certified public accounting firm and no portion of the blog content should be construed as legal or accounting advice. A copy of Franklin Wealth Management’s current written disclosure statement discussing our advisory services and fees is available for review upon request.