Expect The Best, Prepare for The Worst 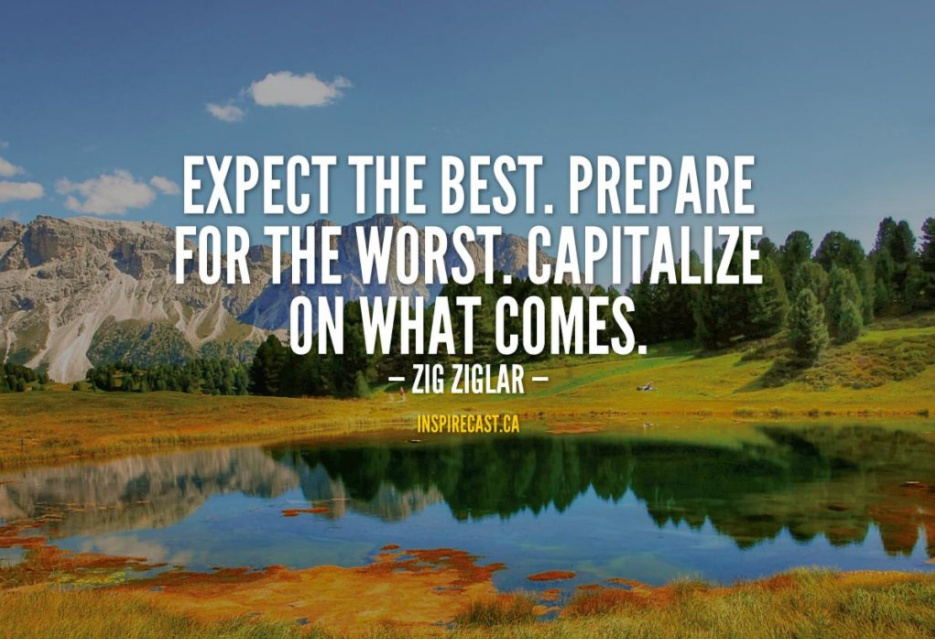 Here's a short video on what to watch for in the next four years.

As clients age, they tend to have many of the same concerns and questions when planning for the future.

Below are some common questions:

What if my taxes, cost of living or medical expenses increase substantially?

What if I am forced into retirement?

What if I become disabled?

What if I live too long?

What if I die too soon?

What if I do nothing?

These are concerns of clients that are motivated by things they want to avoid.
I've found that I and most of our clients are more future oriented. We are more motivated by values and goals to move towards. We prefer to focus on positive outcomes rather than worrying about things to avoid.  However, we want to "prepare for the worst, but expect the best".
To achieve a better result, we want to ask ourselves better questions.
What if I fully educate myself?
What if I save more aggressively?
What if I am able to give more fully?
What if I am able to fulfill a greater purpose?
What if I optimize my liquidation strategy?
What if I diversify more effectively to reduce risk?
What if I take advantage of all tax deductions available?
What it I take advantage of all tax deferred and tax-free options available?
What if I fully plan out my business succession and affairs to best care for those I love?
What if I surround myself with people who are the best at what they do, so I can focus on what I enjoy and perform at my highest level, doing what I do best?

The anticipated division of power with a Democratic President and a Republican Senate will likely give everyone a little of what they want. Markets anticipate the future, greatly discounting uncertainties and appreciating more certain outcomes.
If we look at stock market performance over the last century, the U.S. Stock Market has tended to perform slightly better under a Democratic Presidency. Conversely, a Republican controlled congress has tended to coincide with better performing U.S. Stock Markets. The chart below shows that a Democratic President combined with a Republican controlled Senate, provides us with one of the best average outcomes for U.S. stock market performance. Furthermore, the Moody's report referred to in one of the Town Hall specials anticipated that Republican Senate with a Democratic Presidency was the best result for the economy and the markets over the next ten years. While we do not fully agree with all aspects of the report, it can be accessed here.

Most odds-makers give the Republicans an 85% chance of controlling the Senate. Under these circumstances we will likely see another stimulus bill in January, more regulations, renewed global cooperation and more accommodating trade agreements. We will also have less taxation and spending under a Republican Senate with political parties working together. However, we still have a 15% chance of an alternate reality.
What if the unexpected happens and Democrats take over the Senate?
What if the Vaccines are less effective and less available than expected?
What if we encounter another economic lockdown?
What if Biden's proposed tax plan is enacted?
We typically map out strategies based upon the most likely outcome. But we also want to take precautions if a less likely outcome becomes reality. For this reason, we have been even more focused on end of year planning in 2020.

These are items brought forth in the Biden tax proposal. We recommend planning to protect from some of these proposed changes even if they seem less likely than before the election.
1. Changing income tax rates on households earning over $400,000.
Depending on filing status (married or single), this would cause the highest marginal tax rate to increase from a current high rate of 32% - 37% to 39.6% on income earned over $400,000.
2. Changing the value of certain tax deductions.
This would make itemized deductions reduce tax liability by a flat 28%, instead of one's current marginal tax rate. For example, a household in the highest tax bracket (37%) that deducts $100,000, would save $37,000 on taxes currently. Under the new law, that same $100,000 would be deducted at 28%, a $28,000 savings on tax, which would cost a taxpayer $9,000 in extra tax owed. Additionally, ANY business owner earning over $400,000 could not utilize the popular Qualified Business Income Deduction, which reduces taxable income by 20% currently.
3. Changing capital gains tax rates to match income tax rates and eliminating the "step-up" in basis for beneficiaries inheriting assets.
A capital gain is when an asset (think a stock, or business, etc.) grows in value from it's purchase price - i.e. Stock ABC is purchased at $20 per share, and sold for $30 per share, a $10 per share gain. For assets held over 1 year, those gains are taxed at 0%, 15%, or 20%, depending on income. Under the new proposal, capital gains would be taxed at income rates, which range from a proposed 10% -39.6%.Also, in current law, an asset that is passed to beneficiaries gets a "step-up" in basis. In other words, a $100,000 stock account that grows to $200,000 because of capital gains could be passed entirely tax free to beneficiaries, avoiding tax on the $100,000 of gain. The proposed plan would eliminate this option.
4. Changing the deductibility of pretax retirement plan contributions.
Under current law, pretax retirement plan contributions are deducted from marginal tax rates. .A taxpayer in the 37% tax bracket that contributes $10,000 to a pretax 401(k) would save $3700 in taxes. The new proposal would make this a flat deduction (i.e. 25%) for everyone. .In the example given, the $3700 tax benefit would be reduced to $2500.
Given these potential outcomes, it would be appropriate to consider the following, along with other strategies:
Which Questions Resonated with You?
Those who take proactive action to address issues before they happen tend to fare much better than those who are forced to react because they were unprepared. If any of the questions above resonated with you, we may want to sit down and discuss these items before the end of the year. Feel free to give us a call or email to arrange a time to meet in December.
Joe D. Franklin, CFP is Founder and President of Franklin Wealth Management, and CEO of Innovative Advisory Partners, a registered investment advisory firm in Hixson, Tennessee. A 20+year industry veteran, he contributes guest articles for Money Magazine and authors the Franklin Backstage Pass blog. Joe has also been featured in the Wall Street Journal, Kiplinger's Magazine, USA Today and other publications.
Important Disclosure Information for the "Backstage Pass" Blog
Please remember that past performance may not be indicative of future results.  Indexes are un-managed and cannot be invested into directly.  Index returns do not reflect fees, expenses, or sales charges. Index performance is not indicative of the performance of any investments.  Different types of investments involve varying degrees of risk, and there can be no assurance that the future performance of any specific investment, investment strategy, or product (including the investments and/or investment strategies recommended or undertaken by Franklin Wealth Management), or any non-investment related content, made reference to directly or indirectly in this blog will be profitable, equal any corresponding indicated historical performance level(s), be suitable for your portfolio or individual situation, or prove successful.  Due to various factors, including changing market conditions and/or applicable laws, the content may no longer be reflective of current opinions or positions.  Moreover, you should not assume that any discussion or information contained in this blog serves as the receipt of, or as a substitute for, personalized investment advice from Franklin Wealth Management.  To the extent that a reader has any questions regarding the applicability of any specific issue discussed above to his/her individual situation, he/she is encouraged to consult with the professional advisor of his/her choosing. Franklin Wealth Management is neither a law firm nor a certified public accounting firm and no portion of the blog content should be construed as legal or accounting advice. A copy of Franklin Wealth Management's current written disclosure statement discussing our advisory services and fees is available for review upon request.
Share |